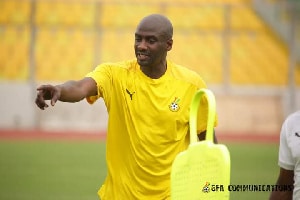 Black Stars head coach, Otto Addo has confirmed that the majority of the 29-man squad announced for the September international break will make the final squad for the 2022 FIFA World Cup in Qatar.

In an interview with Greman newspaper, BILD, the German trainer hinted that he is nearly finished with his squad for the World Cup in Qatar.

Otto Addo stated that 70% of the players he called for the international break will make the final list, while the remaining 30% will be decided on a ‘tight decision.’

“70 percent of the players currently on international duty with Ghana’s squad who meet Nicaragua in Lorca, Spain on Tuesday will be in Qatar,” Addo told Bild.

“The remaining 30 percent will be tight decisions. We’re watching the players closely for the next few games to see who could play for Qatar in October,” he added.

Ghana will conclude their international break with a friendly against Nicaragua on Tuesday, September 27, 2022, at 18:00 GMT at Estadio Francisco Artés Carrasco in Spain.

Is Finland’s Wood City the future of building?

Busy Signal to perform at Stonebwoy’s Bhim Concert in Ghana

Xhaka okay to work with Nketiah in Jesus’ Arsenal absence