London’s River Thames shrinks as a result of extreme heat

The start of London’s Thames River, now in Somerford Keynes in the English county of Gloucestershire.

The starting point of England’s famous River Thames has dried up and moved downstream, following weeks of little rainfall and a heat wave in July that smashed the UK’s all-time temperature record.
The Thames usually begins in the English market town of Cirencester, part of the green and hilly Cotswolds countryside, and flows through the capital, London, and then out into the North Sea.
The start of the river has moved 5 miles (8 kilometers) downstream to Somerford Keynes, according to the Rivers Trust, which works across the UK and Ireland.
The flow there is weak and only just discernible.
“What we’re seeing at the source of the iconic River Thames is sadly emblematic of the situation we’re facing across the country, now and in the future,”
Christine Colvin, Advocacy and Engagement Director for the Rivers Trust, said in a statement sent to CNN. 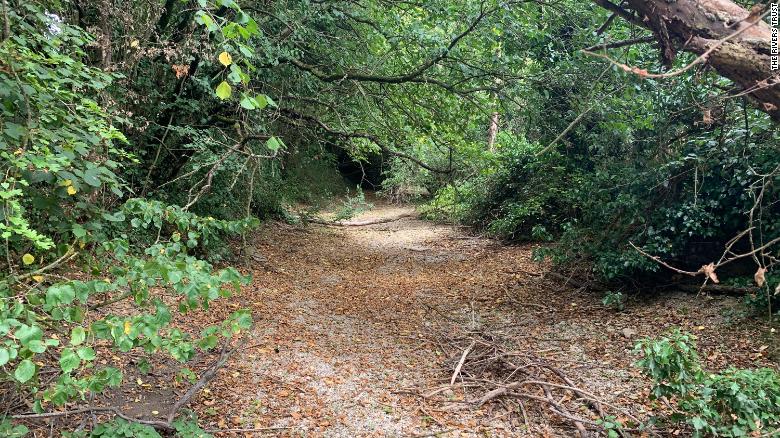 A dried-up part of the river in Kemble, England.
The “source” refers to the start, or headwaters, of a river.
“Whilst it’s not uncommon for the source to be dry in the summer, to only be seeing the river flowing five miles downstream is unprecedented,” she said. “
The climate crisis is leading and will lead, to more extreme weather including droughts and heatwaves.
This poses a grave threat to rivers and, as a result, the wider landscape.”
She added that the country needed to build resilience against the future climate.
“This means detecting household leaks, fixing mains infrastructure leaks, more efficient water use domestically plus implementing sustainable drainage solutions as part of desperately needed green infrastructure,” Colvin said.
The shift in the river’s headwaters comes as authorities in England warn that the nation could officially fall into a drought at some point in August
Southern England recorded its driest July on record since 1836, with only 17% of average rainfall, according to the Met office.
The country as a whole recorded just 35% (around 23 millimeters) of its average rainfall in July.
Several water companies have already announced hosepipe bans in parts of England’s south.
The UK’s Met Office has warned that high temperatures will return to England next week, though they are not expected to reach near the record highs seen in July.
It said in a statement that an area of high pressure was building from the Atlantic into the south and southwest of England and that temperatures could reach the low to mid-30s, in degrees Celsius, toward the end of next week.
These cities are better at enduring extreme heat. Here’s what they’re doing different
“We could see parts of the UK entering heatwave conditions if the above-average temperatures last for three days or more,” Met Office chief forecaster Steve Willington said. “As the high pressure builds there is very little meaningful rain in the forecast, especially in those areas in the south of England, which experienced very dry conditions last month.”
Rebekah Sherwin, the deputy chief meteorologist at the Met Office, said that early August sunshine in the UK didn’t have the same heating potential as mid-July, because the sun is lower in the sky and the days are shorter.
“Both of these factors suggest that we’re very unlikely to see temperatures peak much above low to mid-30s,” she said. “However, this would still be a hot spell of weather.”
On mainland Europe, some countries, including France, are experiencing their third heat wave of the summer, and pockets of the continent are in a drought.
Source: cnn.com
ShareTweetShareSend
Next Post