The President of Ghana, Nana Addo Dankwa Akufo-Addo, has re-assigned the National Security Coordinator, Amb. Major General Francis Adu-Amanfoh (rtd). He will, with effect from Monday, August 8, act as Special Advisor to the President of the Accra Initiative. This was contained in a statement issued by the Director of Communications, Eugene Arhin. “The National Security Co-ordinator, Amb. Maj. Gen. Rtd) Francis Adu-Amanfoh, with effect from Monday, 8th August 2022, has been reassigned by the President of the Republic, Nana Addo Dankwa Akufo-Addo, to act as Special Advisor to the President for the Accra Initiative. He will be working out of the Office of the President. “The Accra Initiative was launched in September 2017 by Ghana, Togo, Benin, Burkina Faso and Cote d’Ivoire as a vehicle for enhanced security co-operation amongst the countries, in response to the growing threats of terrorism and violent extremism in West Africa,” the statement said in part. The statement added that the president has also appointed the Deputy National Security Coordinator to act as the substantive Coordinator.

“In accordance with Section 20 (1) of the Security and Intelligence Agencies Act, 2020 (Act 1030), President Akufo-Addo has subsequently appointed Mr. Edward Asomani, Deputy National Security Co-ordinator, to act as National Security Co-ordinator, with effect from Monday, 8th August 2022. “The confirmation of his appointment is subject to the receipt of the constitutionally required advice of the National Security Council, given in consultation with the Public Services Commission,” it added. The statement also indicated that the Director General of the National Intelligence Bureau (NIB), Kwaku Domfeh, has been appointed Ambassador-designate to the Democratic Republic of Congo. Read the full statement below: 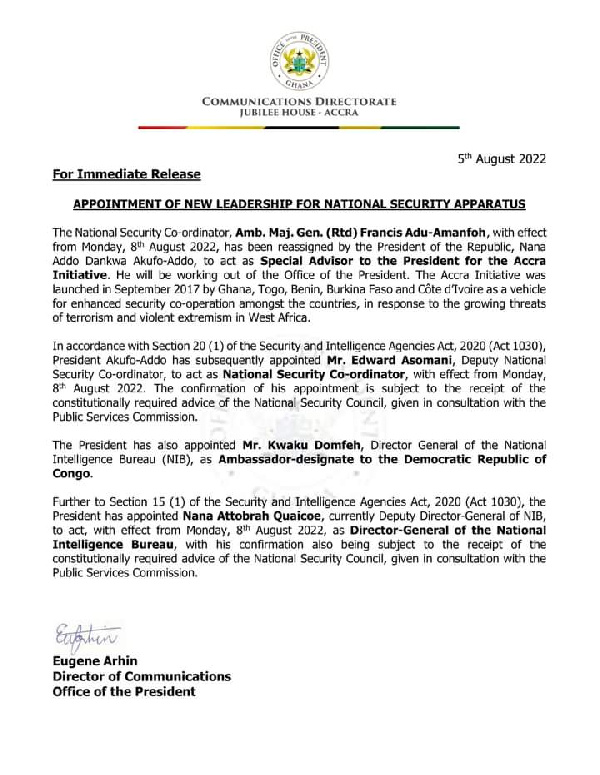