Sankofa Series: All the 12 ministers who formed Ghana’s first government under Nkrumah

The Nana Addo Dankwa Akufo-Addo government sits comfortably at the top of the list of governments since Ghana’s independence that have had the tallest records of appointees serving in various ministerial portfolios.

The ‘elephant-sized’ government of the Nana Akufo-Addo regime was announced right after the New Patriotic Party assumed office in 2017, with many questioning why a new government had to have so many people serving in ministerial positions.

The list of 110 ministers at the time was eventually given a little slash but the undeniable fact that the government of the sitting president has, in Ghana’s history, presented the most voluminous ministerial list, is unquestionable.

It must also be noted that during his campaign towards the presidency, Nana Akufo-Addo had promised to cut superfluous government spending.

At independence, however, when Osagyefo Dr. Kwame Nkrumah formed his government as the country’s first president and prime minister, he also nominated a handful of people to help him steer the business of administering a country.

In this Ghana Month article, GhanaWeb brings you the list of all the twelve (12) people who served as the first set of ministers of the newly independent Ghana in 1957.

Trade and Labour and Leader of the House: Kojo Botsio

Kojo Botsio (21 February 1916–6 February 2001) was a Ghanaian diplomat and politician. He studied in Britain, where he became the treasurer of the West African National Secretariat and an acting warden for the West African Students’ Union.

He served as Ghana’s first Minister of Education and Social Welfare from 1951, as Minister for Foreign Affairs twice in the government of Kwame Nkrumah, and was a leading figure in the ruling Convention People’s Party (CPP).

Known popularly as “Afro Gbede”, he was an indigene of Anyako in the Volta Region of Ghana.

Archibald “Archie” Casely-Hayford was a British-trained Ghanaian barrister and politician, who was involved in nationalist politics in the former Gold Coast.

Having joined the Convention People’s Party in 1951, he was elected Municipal Member for Kumasi and was appointed by Kwame Nkrumah as the Minister of Agriculture and Natural Resources in the government of the First Republic.

When Nkrumah declared Ghana’s Independence on 6 March 1957, he was photographed on the podium flanked by Casely-Hayford, together with Kojo Botsio, Komla Agbeli Gbedemah, Nathaniel Azarco Welbeck and Krobo Edusei.

Dr. Ebenezer Ako Adjei (17 June 1916–14 January 2002) was a Ghanaian statesman, politician, lawyer and journalist. He was a founding member of the United Gold Coast Convention (UGCC), the first political party of Ghana (then Gold Coast).

As a founding father of Ghana, he was one of the leaders of the UGCC who were detained during the height of Ghana’s struggle for political independence from Britain, and a member of The Big Six.

Joseph Henry Allassani was a Ghanaian teacher and politician. He was a member of parliament and a minister of state during the first republic.

He was the first health minister in the first republic of Ghana.

John Bogolo Erzuah (1914-1979) was a Ghanaian diplomat, politician and teacher. He served as a minister of state in 1956, and also represented Ghana in various foreign missions from 1957 to 1966.

Erzuah was born in 1914 at Takinta, a town in the Western Region of Ghana. He was trained as a teacher at St. Augustine’s College, Cape Coast.

He was later appointed Speaker of Parliament on June 10, 1965, in the First Republic of Ghana.

He remained speaker until parliament was suspended by the National Liberation Council, formed after the coup d’état that ended the First Republic.

Ofori-Atta is the uncle of Nana Akufo-Addo, President of Ghana.

Nathaniel Azarco Welbeck (1915–1972) was a Ghanaian politician and a diplomat. He was a founding member of the Convention People’s Party and minister of state in the first republic.

Krobo Edusei was a Ghanaian politician and a high-profile member of Kwame Nkrumah’s government.

Ashford Emmanuel Inkumsah was a Ghanaian chemist and politician. He served in various ministerial portfolios during the first republic.

He served as the First Deputy Speaker of Parliament from 1965 to 1966.

Kwame Boahene Yeboah-Afari (13 November 1920–22 May 1996) was an educator and a politician. He served in various ministerial portfolios of the first republic including serving as Ghana’s first Minister for Agriculture and the first Regional Minister for the Brong Ahafo Region.

He also served as a Member of Parliament for the Sunyani East constituency.

Lawrence Rosario Abavana (1920–29 May 2004) was a Ghanaian politician and teacher by profession.

He served in various ministerial portfolios in the first republic and also served as a member of the Council of State in the third republic.

He was a member of the Convention People’s Party (CPP).

In the caption of March 6, 1957, Ghana Weekly Review, the publication that captured these ministers and their respective portfolios, it reads:

“In addition to Dr. Kwame Nkrumah, Mr. K. A. Gbedemah, Minister of Finance; Mr. Kojo Botsio, Minister of Trade and Labour; and Mr. A. Casely-Hayford, Minister of Communications, have held office since the first General Election in 1951.” 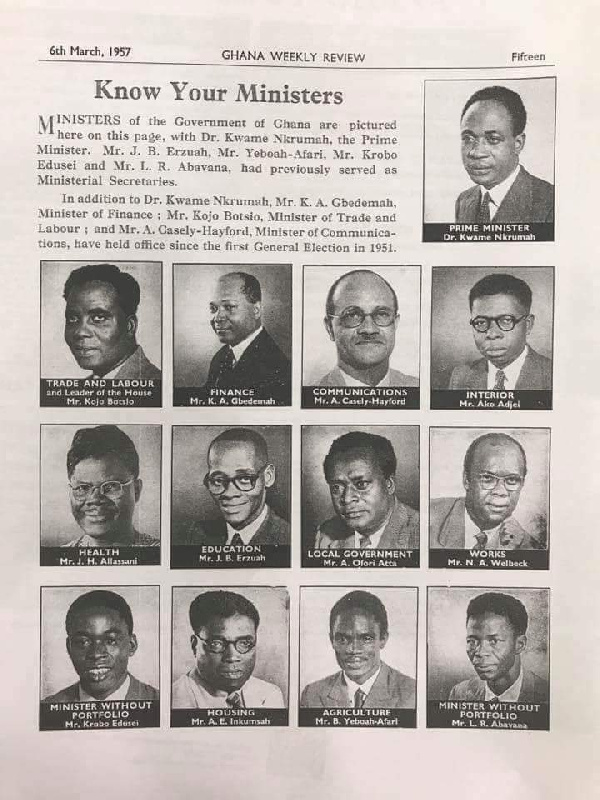