The planned establishment of a gari, starch, and starch spray factory for the people of the Upper Manya Krobo District (UMKD) of the Eastern Region has still not seen the light of day for more than six years on.

The building of the factory, among others, was to address the lack of marketing opportunities for cassava farmers in the UMKD district. Per this, farmers were expected to be encouraged to produce to feed the factory with their products which were to be processed into gari and other products on a commercial scale.

The District Assembly in 2019 secured the seven acres of land to establish the factory to be funded by the Exim Bank, targeted to provide jobs for an estimated number of 200 people in the district.

The establishment of the factory at Prekumase is therefore intended to provide a ready market for cassava farmers in the agrarian district where most farmers produce cassava but lack of ready market and low returns continue to haunt them.

In the absence of the factory, most of the cassava farmers manually process the gari at home for relatively higher profits compared to their gains made from selling the raw cassava.

A disappointed Dadematse for the area, Mr. Jonathan Tawiah expressed his frustration at the failure of the government to provide a factory to address the problem. Leading GhanaWeb’s Eastern Regional Correspondent to the site, the community leader wondered why the facility had still not been established.

“About two years ago, we heard that they were going to build a factory for gari processing at Prekumase to help farmers there. Up till now, we haven’t heard anything, the plot is there but there’s nothing on it up till now,” the distraught Dadematse complained bitterly.

He added that the factory if built would go a long way to address the various challenges faced by cassava farmers by buying their produce to feed the factory to process into gari. He said, “If the factory is built, it’ll help the farmers around Adwenso, Takorase, up to Nya-Kumase or Akumersu to process the gari.”

He thus appealed to the government to ensure that the factory is built to serve as an opportunity for the hundreds of cassava farmers in the Upper Manya Krobo District.

William Dapaah is an elder in the host community. He recalled how the community readily donated land for the project upon request from the local Assembly.
“They came and requested for a plot on which to build a factory. Subsequently, they cleared the land and planted signboards and pillars on it. Now they’ve stopped coming,” he said.

Showing GhanaWeb the boundaries of the plot, he expressed regret that the factory has not seen the light of day and appealed to the government to fast-track any intentions of setting up a gari processing factory in the area.

District Chief Executive (DCE) for Upper Manya Krobo, Honourable Joe Sam in response said the government was in consultation with an unnamed private partner for a Public-Private Partnership (PPP) to establish the factory. 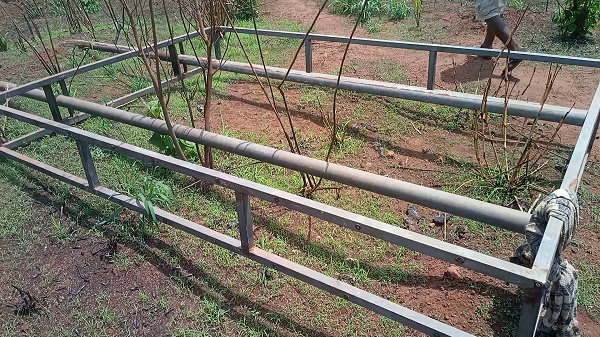 The current DCE who replaced the former DCE for the area, Mr. Felix Odjao Nartey could not explain what caused the delay of the project during the government’s first term but was optimistic that a partnership would be struck with a private partner for the successful execution of the project.

“I’m now looking for the company for that project…you can cultivate your cassava at Anyaboni or Akateng and then transport it to Sekesua (Prekumase) for processing,” he said, adding that the farmers, in the absence of the factory, were resorting to the regular markets to sell their produce.

The “One District One Factory” was designed as a comprehensive programme for rural industrialisation, involving the setting up of at least one medium to large scale factory in each of the administrative districts of Ghana.

Over 156,000 jobs created from 1D1F – Trade and Industry Minister claims

We are committed to investing more in Ghana – MTN Group CEO

Is Ghana Africa’s most expensive country to live in? – BBC report seeks answers

Manufacture of petroleum products push PPI to 31.2% in April