Mini-market fire on campus is being investigated – KNUST

The incident on Sunday forced authorities to evacuate students to safety

A committee would be set up to investigate a fire incident that occurred at the Kwame Nkrumah University of Science and Technology (KNUST) campus.

A Deputy Registrar, University Relations at the KNUST, Dr Daniel Norris Bekoe disclosed this to dailymailgh.com.

A mini-market behind KNUST’s Republic Hall caught fire at about 1:31 am Sunday forcing authorities to evacuate students to safety.

Fire machines were deployed to the scene to douse the flames which had destroyed at least 10 metal structures belonging to private individuals.

Briefing journalists at the scene Dr Beckoe said: “Management of the University intends to put a committee in place to make sure that it assesses all such small mini-markets closer to the Halls of residence and take a decision on them”.

The aim is to “forestall any of such events in future”, he said adding that the committee will also take recommendations from the Ghana National Fire Service.

No reported casualties at Republic Hall

It remains unclear what started the blaze which happened at the time students were returning to campus after spending months at home due to COVID-19.

The University in a statement debunked media reports that some of the students were injured in the process.

“Campus is calm and all students are going about the routine activities peacefully.

“We wish to entreat the general public to disregard the misinformation on social media that the Republic Hall was burnt and 17 persons including a porter lost their lives”, the statement further clarified.

Read the full statement below 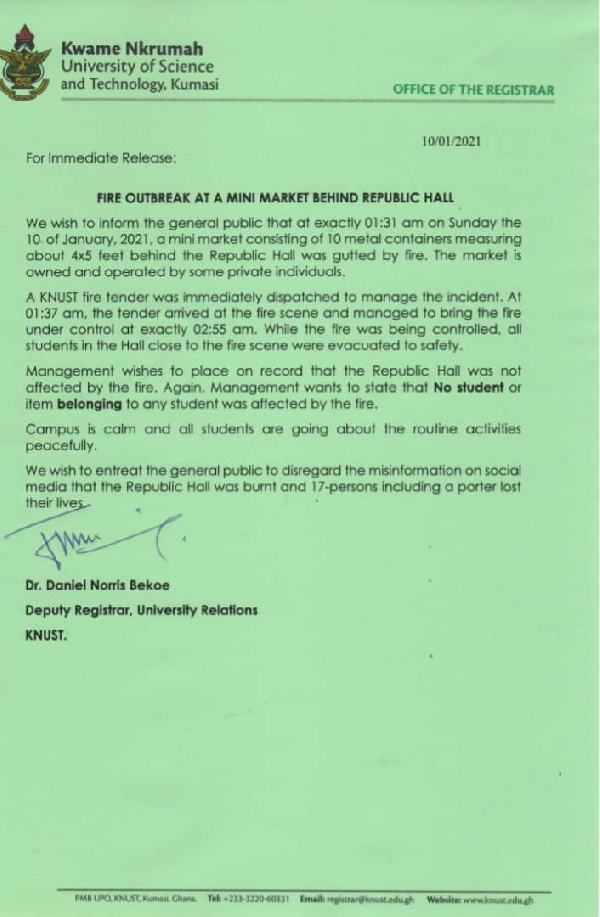 See this 1958 graduation photo from the KNUST