What you need to know about the Frafra people of Ghana, West Africa

The Frafra (also known as Gorse) are hardworking agricultural Gur-speaking people ethnic group in Northern Ghana and Southern Burkina Faso. The Frafra people who live predominantly in the north-eastern part of the Upper East Region of Ghana called themselves in Gurune language as “Gorse,’ whilst some historians refer to them as “Gurune.” However, when a Frafra meets any Gurune speaking person he refers to him or her as “Mabia” (My family).

Their popular name Frafra is a colonialist term given to them by the Christian Missionaries, who when they first encountered Frafra farmers were greeted with the common greeting to people working “Ya Fare fare?”, which means “How is your suffering (work)?” The missionaries began referring to these Gurune people as Frafra, a derivation of the greeting, which eventually was adopted by the people themselves and has been popularized by the Southern Ghanaian peoples.

The ‘MPs’ who opposed the name ‘Ghana’

The Frafra people are also well known for their artistic craft products: straw articles like hats and baskets as well as feather products. Their products can be found all over Ghana in the major towns that tourists visit. Since the colonial era Frafra youth have been compelled to emigrate to the southern parts in search of menial jobs.

Bolgatanga is the commercial centre of the Frafra people. Other important villages and towns include Bongo, Tongo, Zuarungu, Zoko, Zuarengu, Somburungu, and Pwalugu. It must be noted however that Tongo is the principal town of the Talensi people who are ethnically different from the Frafra. Today, the Frafra can be found in many major towns and villages all around Ghana including Accra, Kumasi, Tamale, Sunyani and Cape Coast.

They are also highly mobile, often travelling south to look for work during the dry season. There are also some Gurune-speaking people (the Nankani) in Navrongo District, which is generally a Kasem-speaking area. Native Gurune is also found in Burkina Faso, in the Nahouri province, Eastern part of Tiébélé and the region of Pô. 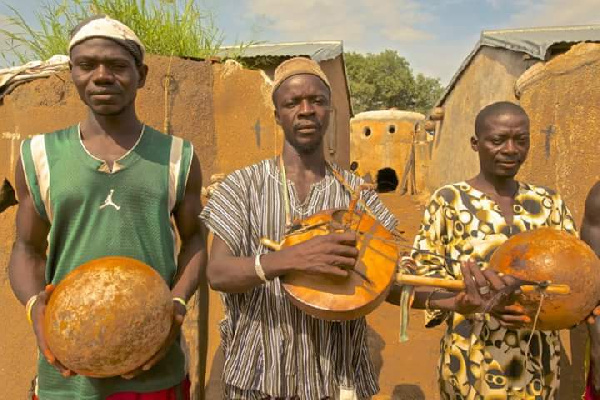 The Frafra people are believed to have come from the Gur-language family of the Oti-Volta River. They occupy the Bolgatanga, Bongo and Tellensi-Nabdan districts of the Upper East Region of Ghana. They share borders with southern Burkina Faso and are believed to have migrated from there to their present location. Their language is very close to Moshie, which is the language of one of the major ethnic groups in Burkina Faso.

The historical origin of Frafra people is very scanty and much research need to be done on them. However, there are certain pointers to their historical migration. According to a legend narrated by Anthony Atarebore, the Frafra and the Dagaaba were both linked with the Dagomba and share a common origin. This Dagomba connection re-echoes Hébert’s legend about the first Dagara, an orphan who was accused of witchcraft and expelled by the Dagomba chief. The orphan accordingly fled towards the Black Volta and stayed near Babile, across the river. However, both legends do not account for the relationship with other ethnic groups, which are shown to belong to a common Mabia ancestry (Bodomo 1994).

According to Atarebore’s legend, “a long time ago, Dagomba, Gurune and Dagao were brothers, or rather cousins. They lived somewhere in Southern Africa among the Bantus. From Southern Africa, they began to migrate northwards through Zimbabwe, Uganda, Rwanda and Kenya. Then, turning westward, they moved to Sierra Leone, Northern Nigeria, and finally to Ghana. Historians differ in their opinion as regards the nature and scale of these movements. For instance, Lentz (1994) rejects the hypothesis put forward by Eyre-Smith’s8 that the history of northern Ghana, indeed of the whole West African savannah, seemed to consist of ‘constant’ movements of people as a result of slave-raiding, internecine warfare, etc., whole sections of a tribe or family breaking away and migrating to a new territory.

It is not very clear whether the Frafra existed during the old Ghana Empire in the Middle Ages and formed part of that empire since its present location is not so far from the location of the former empire. The facts, however, cannot be verified. According to some elders, the people of Zuarungu, one of the major settlements of the Frafra, migrated from Wuarungu in Burkina Faso. It is believed that the name Zuarungu is derived from Wuarungu. Even today, there is still a link between the people of Zuarungu and the people of Wuarungu.

For some Frafra chiefs, their tradition traces their historical and cultural ties to the Mamprusi kingdom. This is the case of Namos of Tongo whose oral traditions recount how their apical ancestor- Mosore- had come to Tongo on exile from Nalerigu and had remained in Tongo. Similar traditions seem to exist in other Frafra enclaves. Bongo district is made up of two main communities. The original settlers are Gurune-speaking and the second group is the Mamprusi stock that settled mainly in the central part of the present. Some Frafra Nangodi people also share similar Mamprusi ancestry.

Hearts of Oak part ways with Joseph Esso, Christopher Bonney and 3 others

Fact-Check: CAGD has not directed government workers to update their electronic payslip with their photos