A spotlight on the hardworking Dagaaba people of Ghana

Due to their social mobility, the Dagaaba or Dagarti can be found in almost every part of Ghana and in other West African Countries like Burkina Faso and Ivory Coast. They are Known for Playing the traditional musical instrument, the gyil, also known as xylophone and also renowned for using cowries in the modern times to transact business alongside money.

The ‘MPs’ who opposed the name ‘Ghana’

The Dagaaba (Dagarti/Dagao) are renowned for being the last people in the modern world to trade and transact commerce with precious cowries. Cowries are still used as a form of security bonds just as people trade in gold, in barter trade as well as a form of bride-price in Dagawie (Dagaabaland).

Among the ethnic groups in Northern Ghana, the Dagaaba or Dagarti are number one ethnic group known for their social mobility from the North to the South long before British colonization of Gold Coast (Ghana).

The Dagaaba people (singular Dagao, and in northern dialects, Dagara for both plural and singular are an ethnic group located north of the convergence of Ghana, Burkina Faso and Côte d’Ivoire. The actual name of these people is Dagaaba or Lo Dagaa but most outsiders call them Dagarti. A person from Dagarti or Dagaaba tribe is known as Dagao.

The Dagarti speaks the Dagaare language (also spelled Dagare, Dagari, Dagarti, Dagaran or, Dagao), which belongs to the Oti-Volta group of the Gur branch of the Niger-Congo language family. Dagaare is a two-toned language also referred to as Mabia subgroup of the branch of the Niger-Congo language of West Africa. It is spoken by about 2 million people, mainly in Ghana but also in neighbouring regions of West Africa, like Burkina Faso and the Ivory Coast.

Historically, the origins of Dagaaba people has been a complex mystery to tackle. However, the evidence of oral tradition is that the Dagaaba are an outgrowth of the Mole-Dagbani group (either Mossi or Dagomba) which migrated to the semi-arid Sahel region in the fourteenth century CE. They are believed to have further migrated to the lower northern part of the region in the seventeenth century.

The Dagaaba people with total population of over 2 million people have the larger percentage of its population residing in Ghana. They are found in Upper West Region of Ghana and reside predominantly in Lawra, Nadowli, Jirapa, Nandom, Lambussie, Kaleo, Bole, Birifu, Tugu, Daffiama, Wechiau and Hamile. Large communities are also found in the towns of Wa, Bogda, Babile, Tuna, Han and Nyoli.

Burkina Faso has the second highest concentration of Dagaaba people and they can be found in Sud-Ouest Region, especially in Ioba Province, but also in Poni, Bougouriba, Sissili, and Mouhoun provinces.

In Ivory Coast where there are smaller concentration of Dagaaba; they can be found in the districts of Bonduku and Buna. 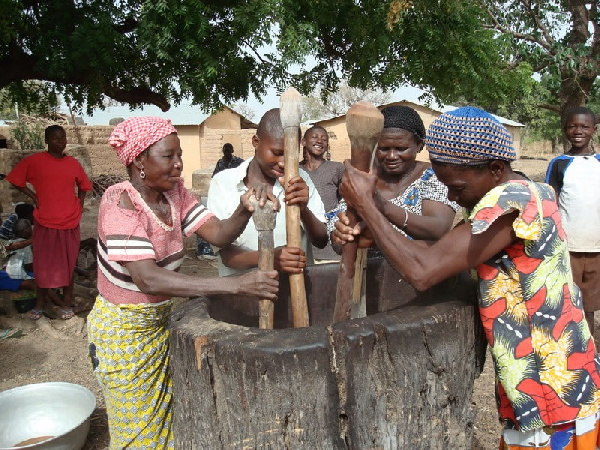 Some of the differences that exist between the Dagaare-speaking communities are somehow subtle and not easily noticeable by the on-looker. For example, although the staple dish among the Dagaaba is saabo or Sao (called “to” in many other African languages), the constitution/texture of this millet, sorghum or maize-based meal may vary from one community to the other.

In addition, the soup that is eaten with the saabo may be prepared in a slightly different manner in spite of the fact that virtually the same ingredients may be used in each case. Meat is not considered an important food, except in special meals for instance at funerals. Apart from these occasions, only guinea fowl are slaughtered for regular consumption.

Similarly, pito, a mildly alcoholic beverage made of sorghum, is common in all the communities of Dagawie. However, the taste and level of alcohol of this beverage may vary from community to community and from one pito-house (where pito is brewed for sale) to the other within the same community.

Burundi refugees call for deal to allow them home