Nii Amon Kotei, the acclaimed designer of the coat of arms of Ghana was a Ghanaian artist who doubled in sculpture, painting, music and surveying.

Amon Kotei was born on 24 May 1915, at La, near Accra, and trained as a surveyor. He was a distinguished artist and designed the National Coat of Arms on 4 March 1957.

Why the Akwamus respect pigs

Kotei was commissioned to do the design by Ghana’s first President Osagyefo Dr. Kwame Nkrumah and the then British Colonial administration as independence drew near in 1957.

The Coat of Arms symbolizes government sanction and it is mostly found at important Government places like the Osu Castle, the Courts and other government offices.

The Ghana Coat of Arms, found on all government official letter heads, is composed of a shield, divided into four quarters by a green St. George’s Cross, rimmed with gold. However it has not been changed and remains what was originally produced by Amon Kotei. 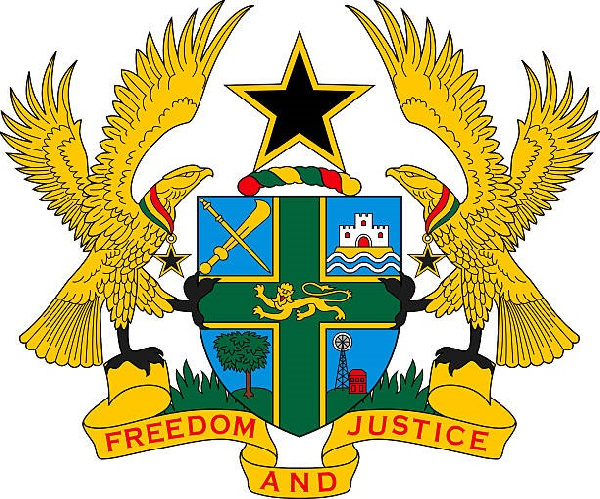 The Ghana Coat of Arms

The Ghana Coat of Arms is composed of a shield, divided into four quarters by a green St. George’s Cross, rimmed with gold. The following are the symbols in the quarters and their meanings.

Represents the Agricultural wealth of the country.
A Mine Shaft.
Position: Bottom right hand quarter.

Represents the mineral wealth of the country.
A Gold Lion.
Position: In the centre of the green St. George’s Cross.

Represents the continued link between Ghana and the Commonwealth
Black five pointed star rimmed with gold standing on the wreath of red, gold and green colours.
Position: Surmounting (On top of) the shield.

Represents the lodestar of African Freedom
Two Eagles, around each of whose neck hangs a black star suspended from a ribbon of Ghana colours – red, gold and green
Position: Supporting the shield (Coat of Arms).
Signifies a protector with strength, very clear and attentive eyes keeping watch over the country.

The motto FREEDOM AND JUSTICE is found beneath the shield.

Nii Amon Kotei studied under a scholarship at Achimota School and later received a scholarship to study art at the London School of Printing and Graphic Art from 1949 to 1952.

Kotei also fought for the Royal West African Frontier Force during World War II. and also worked in the Cartographic Division of the Army. He drew maps and plans for use by soldiers on the war front. He also taught in Achimota School.

Amon Kotei was awarded the State Honour of Grand Medal, Civil Division, Coat of Arms Design presented to him on Friday, 7 March 1997, by then president Jerry John Rawlings. He received several other awards.

Nii Amon Kotei died on 17 October 2011, after which the parliament of Ghana paid tribute to him.

Government lied on claims PPEs were supplied all schools – GNAT

National PTA President may be misinformed – Ministry of Education