Assin Central Member of Parliament Kennedy Ohene Agyapong is considered as a very controversial character on the political scene. But one thing that endears him to his many followers is his outspokenness and truthfulness. Even when it comes to his family, he does hide anything. While he is married, the business tycoon Kennedy Agyapong has not hidden the fact that he has given birth outside his marriages and also has ‘other ‘wives’.

He recently revealed that he has 22 children with thirteen different women. He has two children with Sarah Adwoa Safo, member of parliament for Dome Kwabenya and the Minister of State In-Charge of Procurement.

Akufo-Addo has scored an ‘F’ in fight corruption – Arthur Kennedy

I will not seek parliamentary re-election in 2024- Kennedy Agyapong

Many people are wondering who Kennedy Agyapong wedded wife is. Upon all the popularity of loud-mouth law maker for Assin Central, her wedded wife is not known by many even though she operates in the media space. 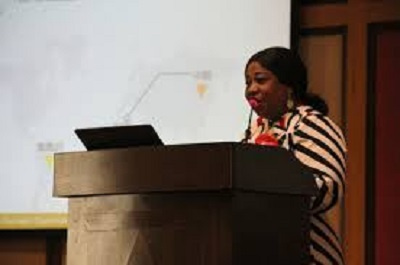 Mrs Stella Wilson-Agyapong is the registered owner of Oman FM Limited (Kencity Media) which manages Oman FM and Net 2 TV, according to the National Communications Authority.

They are involved in the KenCity Group of Companies, which comprises of 13 companies stretching from media, cold stores to real estate. According to the National Communication Authority, Mrs Stella Agyapong operates as the owner of KenCity Media and his husband, Kennedy Agyapong serves as the CEO.

She was a Council Member of the Ghana Independent Broadcasters Association (GIBA) from 2010 to 2012. She was nominated as Media Entrepreneur of the Year, for an award for the media entrepreneurs who have demonstrated exceptional media entrepreneurship skills in 2013.

Mrs Stella Wilson-Agyapong is the owner of Mina D’Oro Ventures and Messrs Imperial World Business Limited and all subsidiaries of KenCity Group of Companies. Mrs Stella Agyapong is the current board chairperson of the Ghana Shippers Authority. She was sworn in by the Minister of Transport, Mr Kwaku Ofori Asiamah in 2017.

Lady who faked her kidnapping jailed 6 years by Takoradi court

Fake kidnappings that have happened in Takoradi