Ghanaian actress and television presenter Ama K Abebrese has asked her colleagues in the entertainment industry to boycott Accra FM over the unprofessional behavior of their Mid-morning Show host, Nana Romeo.

In a series of tweets sighted by GhanaWeb, Ama K said the radio presenter lacks professionalism, and called on actors, musicians and all in the creative arts space to decline interview invitations by the station, until such time they will know their value.

Ama K’s comment comes on the back of an incident that happened at the Accra FM studios earlier today between Nana Romeo and Wendy Shay, which caused the musician to walk out of the interview. At an interview session to promote her new song ‘Emergency’, and to celebrate her two-year anniversary in the music industry, Wendy Shay was surprised when Nana Romeo kept asking whether she was having an intimate affair with her manager, Bullet of Rufftown Records. Nana Romeo who was not satisfied with Wendy Shay’s initial ‘No’ answer, kept pushing, almost threatening to release evidence he has that suggest that Wendy Shay was actually having an affair with Bullet.

The ‘Uber Driver’ singer apologized to the listeners and her fans and walked out of the interview.

It would also be recalled that not long ago, same Nana Romeo called out KiDi and reprimanded him, and went ahead to cancel an interview with him for coming to the studio late.

Reacting to the incident, Ama K Abebrese wondered if Nana Romeo has been paid by the station to intimidate his guests. She called him out for being unprofessional. 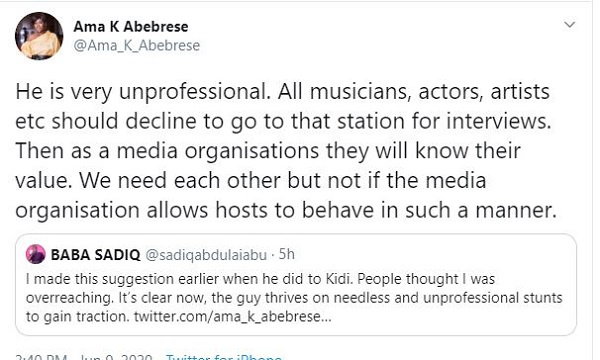