Prophet Temitope Balogun Joshua is a popular and reputable man of God, a televangelist and a charismatic pastor. He is renowned for his accurate prophecies that rarely fails.

He is commonly referred to as T. B. Joshua, the leader and founder of The Synagogue, Church of All Nations, who broadcasts from the Emmanuel TV television station, Lagos.

“3 dead, 18 dismissed.” see what happened to the police officers who arrested TB Joshua years ago.

Prophet T.B Joshua comes back from the mountain with powerful message

However, he has reminded the world of his prophecies to the President oF America, Donald J. Trump.

According to the prophet who reminded the world through his Twitter handle, sharing the link to the message that reads:

During my prophecy for 2020 (https://t.co/kZYI65l4me) released on 28th December 2019, prophecy number four concerning America was given as follows:

“Approach to the security issue will affect the candidates and swing voters in the next election.” President Trump, this is what is happening now. Another one is coming. President Trump, wake up to checkmate this. It will go beyond this.

Another one is coming, starting from the ending of June. Where there is no vision, people perish. During your regime, the name of Jesus has been given more honour. What glory! Let us look beyond our palace for God’s authority. With God, all things are possible! Let us act now.

It is not all up to God; we have a role to play. More appeals to the people and security are required – in a language that will douse the tension and stop this situation – so we can then commit the future one into God’s hands.”

MY MESSAGE TO PRESIDENT DONALD TRUMP ON SECURITY ISSUES – PROPHET TB JOSHUA
During my prophecy for 2020 (https://t.co/kZYI65l4me) released on 28th December 2019, prophecy number four concerning America was given as follows: pic.twitter.com/Ugg2lwCd9U 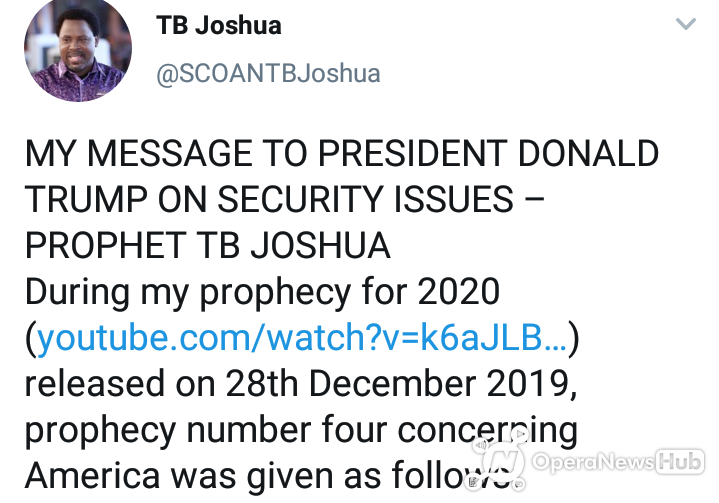 He also called on prayers as he urged believers to pray because we all have a role to play. The presidential election is coming in November, and the latest happenings in America is synonymous to the Prophet’s prophecy which could lead to a swing on voters’ choice.

When shall we breathe? - Senyo Hosi's pensive poetry to racial abuse victims

‘I stopped doing ‘jama’ songs because of Patapaa’ – Lilwin

Shame on you – PPP’s Nana Ofori rebukes Wontumi, others

Voter Registration: EC promises to make up for lost days