Odd News: Over 1.8 million people join Facebook group where everyone pretends they are ants

“A group where we all pretend to be ants in an ant colony” has to be one of the most popular and at the same time strange Facebook groups ever created. It’s basically 1.8 million people pretending they are ants and worshiping their queen.

Being stuck at home for weeks on end makes people do crazy and unusual things, and the rise of Facebook’s now famous “ant group” is a perfect example. Created in June of 2019, A group where we all pretend to be ants in an ant colony numbered a respectable 100,000 members in march of 2020, but then the Covid-19 pandemic started wreaking havoc everywhere prompting social distancing and isolation measures, and the number of members skyrocketed to over a million in less than two months. At the time of this writing, the Facebook group where everyone “worships the Queen and do ant stuff” has over 1.8 million members.

As you’ve probably already figured out, apart from the general idea of a group of humans pretending to be ants online, the main draw of this online community is the opportunity to escape all human issues and escape the stress and worried of daily life. In fact, one of the rules that members of the group must abide by is never to discuss politics of human issues in general. The group is all about being an ant, helping the colony, and above all, worshiping the Queen. The group has become so popular these past couple of months that its moderators have been struggling to keep up with new member requests.

“We have so many user requests and pending posts that this has become a job for me,” Tyrese Childs, the group;s creator, told NBC. “I think people are searching for something to do right now. You can only scroll so much on social media.” 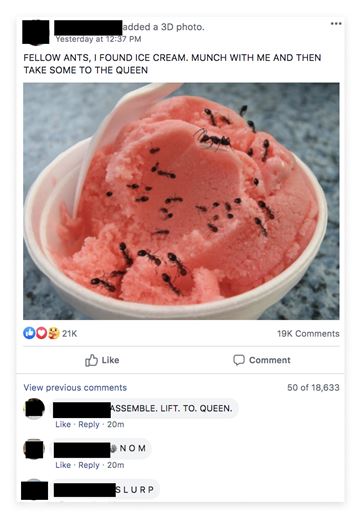 In case you’re wondering what goes on in a Facebook group where nearly 2 million people pretend they are ants in a colony, perhaps this photo of some ants crawling on a cup of ice-cream will give you some idea. It got 18,000 comments from the group’s members, most of which read  “NOM,” “SLURP” or “LIFT.TO.THE.QUEEN.” Din I mention that all members have to refer to fellow colony mates as “Ant-their real name”? Pretty crazy stuff, right? But it gets people’s minds off things, and that’s all that matters.

“The ant group sounds like a psychologically safe space to meander with nothing scary and nothing political and nothing coronavirus-related,” Andreas Lieberoth, an assistant professor of media psychology at Aarhus University in Denmark, said. “I don’t know if ants get COVID, but in this colony, they don’t.”

So if you’ve become so bored that acting like an ant online doesn’t sound like such a bad idea, request to join “A group where we all pretend to be ants in an ant colony”. What do you have to lose?

Trump tells U.S. governors to crack down on violent protests

Use MoMo, e-banking for offering, no crowd dancing, handkerchief waving – Government to Christians