The Upper East Regional Minister, Tangoba Abayage, has urged Muslims in the region and across the country to remain firm and strong in these troubling times of the deadly Coronavirus.

As Muslims in the region joined the rest of the world to observe the end of the Ramadan, Ms. Tangoba was hopeful that the period would be used to strengthen their spirituality and draw them closer to the teachings of the Holy Prophet Mohammed.

Eid-ul-Fitr: May 13 declared as a statutory public holiday

In a goodwill message on the occasion of the Eid-Ul-Fitr released to the media, Ms. Tangoba congratulated Muslims for attaining another spiritual milestone and encouraged them to allow the virtues cultivated during the Ramadan spur them on.

“As the solemn period comes to an end, I wish to congratulate all Muslims in the Upper East Region on the attainment of another spiritual milestone. Surely, we have matured in our spirituality over the period”.

“There is light at the end of the tunnel and we should allow the virtues cultivated during Ramadan to spur us on to the end”. The message said in parts. Ms. Tangoba reminded Muslims to be measured in the celebration this festive occasion by continuously adhering to the preventive protocols to stop the spread of the virus. 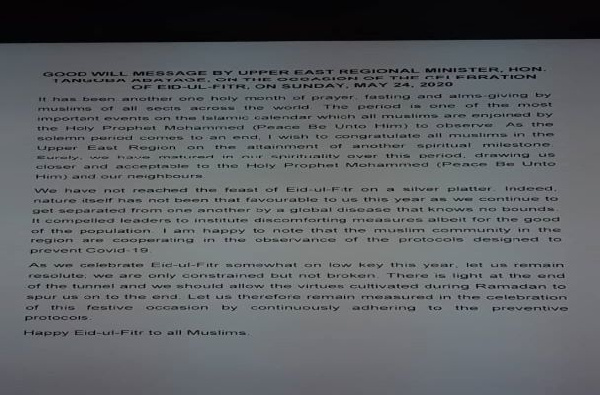