Senyo Hosi is also into agro-based and agro-processing activities

Chief Executive Officer of the Ghana Chamber of Bulk Oil Distributors, Senyo Kwasi Hosi has responded to comments made by controversial politician Kennedy Agyapong, suggesting that anyone who makes money and embarks on farming is a fool.

“If you make money in Accra, and you tell me you are going to farm you are a fool. I failed at farming, not because of my management but because of litigation.”

Henry Quartey meets Kennedy Agyapong in the US

Mr Senyo Hosi who is also the Chief Executive Officer of HGL Company, an agro-based and agro-processing entity, in his response took to his social media page to respond. “Dear Kennedy, I am proud to be a fool,” he wrote.

Mr Hosi who didn’t seem pleased with the utterances of the Assin Central lawmaker, has always believed that agriculture is the key to Ghana’s economic success.

Having been an ambassador for championing the youth to cultivate the habit of tapping into crop production, he was disappointed at Ken Agyapong’s comments about farming.

Addressing the issue of farming on the Joynews channel on Monday, Mr Agyapong noted that “any person who wants to be serious in life” should leave the village for a bigger town or city “and start hustling”.

According to him, “When you wake up in the morning and you pray that God let me be poor, then you go into farming.” Mr Agyapong said.

He also explained that farming does not pay, while cautioning entrepreneurs not to establish businesses in the villages so as not to be defrauded by the people in the villages. 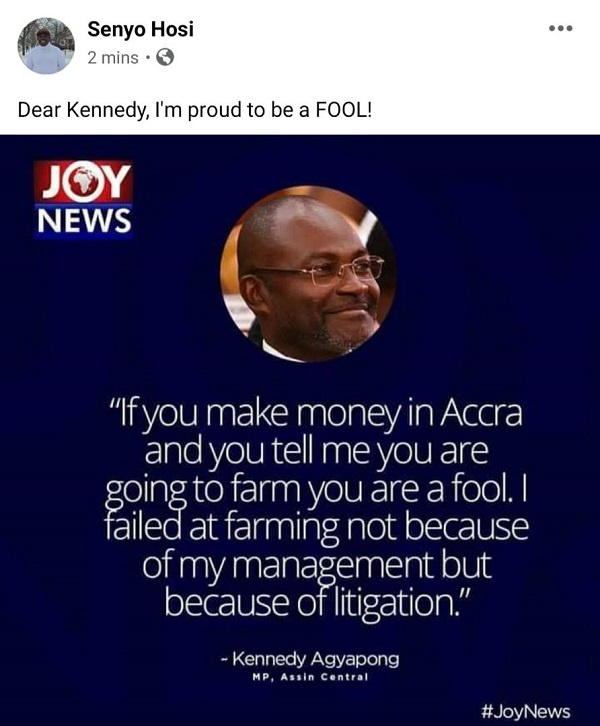