Ursula campaigns for Ghana’s candidate as Dir. Gen at WIPO

The Minister for Communications, Mrs. Ursula Owusu-Ekuful has urged France to support Ghana’s bid to the position of Director General at the World Intellectual Property Organisation (WIPO).

In a meeting with the French delegation in Paris, Mrs. Owusu-Ekuful emphasised on the expertise and competencies of the Ghanaian candidate, Dr. Edward Kwakwa and, therefore, capitalised on the long-standing relationship between Ghana and France to urge the team in supporting Ghana’s bid for the position of Director General of WIPO.

Carlos Ahenkorah: Go and ask your grandfather; did we make the law? – A Plus ‘bites’ Ursula Owusu

She also eulogised the Late Kofi Annan on the impact he brought to the United Nations and the world at large and expressed the hope that France would support Dr. Kwakwa to bring same to WIPO and its constituents as well.

For his part, Dr. Kwakwa, in a meeting with the Deputy Director, United Nations, International Organisations Human Rights and Francophony, Mr. Jean-Marc SÉRÉ-CHARLET noted his commitment to strengthen dialogue among member states with the aim of expanding the mandate of WIPO to promote and protect global intellectual when given the nod.

The second leg of the Minister’s Special Envoy tour was made up of Ghana’s Ambassador to France, Md. Anna Bossman, Dr. Kwakwa and staff of the Foreign Ministry.

Ghana is contesting the position with Republic of Singapore, Republic of Kazakhstan, China, Colombia and Peru.

Japan, Argentina, Estonia and Nigeria have since 14 February 2020 withdrawn their candidacy. 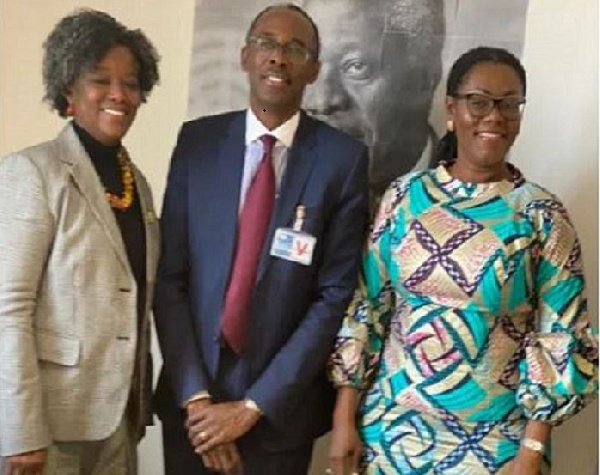 Upon the announcement of vacancy of the position of DIRECTOR GENERAL, at the World Intellectual Property Organisation on 30 September 2019, Ghana nominated Dr. Edward Kwakwa on 6 November 2019 for consideration on the position.

Dr. Kwakwa joined the Organization in 1996 has served WIPO with great distinction for almost 24 years. He rose to be Senior Director, Department for Traditional Knowledge and Global Challenges.

Dr. Kwakwa has extensive knowledge of the multilateral organizations system, having worked at WIPO, the World Trade Organization (WTO) and the Office of the United Nations High Commissioner for Refugees (UNHCR) in the last 25 years. Over this period, he has gained progressively responsible managerial experience, including serving on the Senior Management Teams of the current as well as the previous Director General of WIPO.

Photos: Obour quits politics to sell shito after his defeat

I accept your nomination; I’ll help you win – Jane Naana to Mahama

Get ready for the fire ahead – NPP tells Naana Opoku-Agyemang