The truck was loaded with bags of rice and flour

In what could have been a serious accident resulting in injuries and casualties, a truck driver averted the situation by saving commuters and pedestrians when his brakes failed him on the N1 motorway in front of the Royale Fiesta Hotel in Accra today.

Narrow escape for driver as train rams into truck at Takoradi

According to eyewitnesses who spoke to GhanaWeb, the driver did well in the heat of the moment and was able to avoid a much more grievous situation.

“We were here selling when we heard the car honking in its approach and then we saw the driver drove into the hedge and subsequently into the gutter…He intentionally drove there, his brakes had failed him and he would’ve run into people and other vehicles. But he was able to save everyone and himself, nobody including himself got injured,” the eye witness told GhanaWeb.

As at the time GhanaWeb reporters arrived at the scene, the bags of rice and flour which were loaded in the truck were being offloaded into another truck as the one involved in the accident had overturned in the process.

Watch the video below: 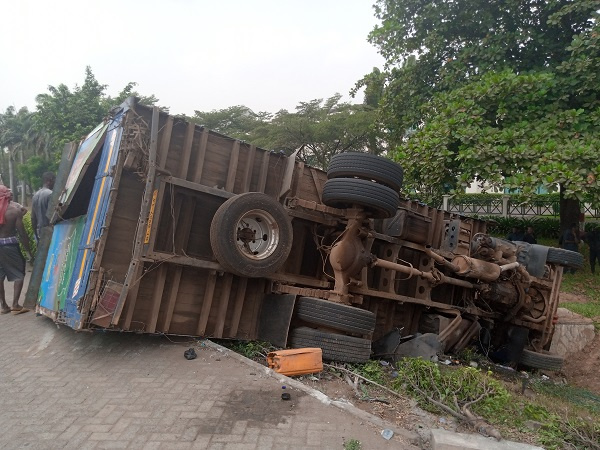 ‘Ghana’s democracy is growing but not maturing’ – Manasseh Azure

Agyapa deal: ‘Be proactive’ – CSOs to Special Prosecutor, other bodies

Western Togoland attacks: ‘I smell an elephant in the Volta Region’ – Toobu