The action according to the youth was to protest the re-emergence of rosewood harvesting in the municipality.

Irate youth in Tumu, the capital of the Sissala East Municipality in the Upper West Region today, February 18, 2020, locked up the offices of the Forestry Commission.

The action according to the youth was to protest the re-emergence of rosewood harvesting in the municipality.

Shedding more light on the move, Chairman of the Sissala Youth Forum, Yussif Napuna indicated that several attempts to get officials of the Commission for a consultative discussion had failed.

This situation, therefore,  left them with no other option than to resort to the closure.

“It is important that the forestry resources of our land are put to good use. When we think that these resources should be re-channelled but people concerned do not follow the law, then it calls for action for the will of the people to prevail. We want some series of engagement with stakeholders. We are going to take further actions after this so that we deliberate on this.”

“We took into consideration all the legal implications and decided to engage them but they are not willing to talk. We didn’t tie or assault anybody. We just spoke to them and told them that if they are not ready to engage us, they should just go out of the office if they do not want to work…and they left. After they left, they then called the police.”

The Forestry Commission has in the past rejected claims that officials of the commission are complicit in alleged illegal felling of rosewood.

Clement Apaak, Member of Parliament who has been at the forefront of the fight has criticized the government’s seeming lack of seriousness towards the fight against the illegal felling of rosewood in the country. 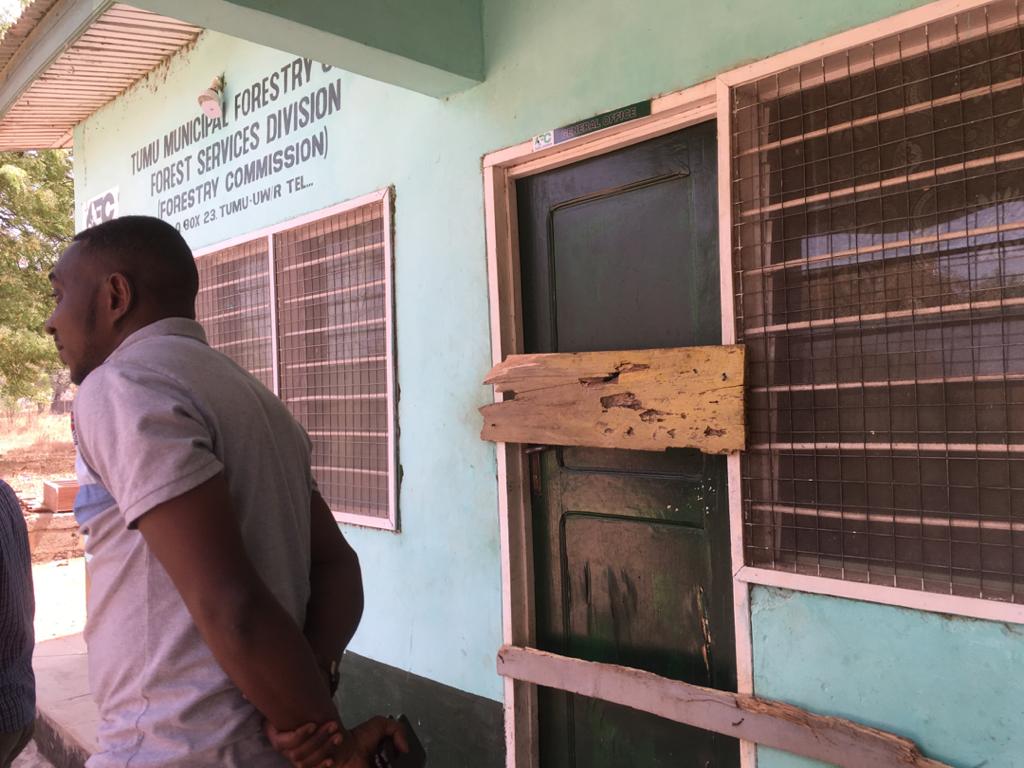 Meanwhile, the District Manager Sissala East Forestry Commission, Jasper Yao Dunyah is surprised at that action by the incensed youth.

According to him, although he had received a letter inviting his outfit to the said meeting, the two parties had not concluded on the modalities for the discussion because he together with his deputy were not available on the scheduled date and had requested for a later time.

“The youth had invited us to a meeting to strategise based on rumours that there were rosewood dealers in town. Looking at the letter, we were the pivot of the discussion. So I called the President of the Youth to inform him I am not at post. Unfortunately, my Deputy was also not around. So I told him because rosewood has banned, only myself or my deputy can attend because we cannot present any of the subordinates. But he told me that because other stakeholders have been invited, he will call me back to see how best we can solve it and to my surprise, he never called me back. They went ahead to organise the meeting after which they marched to our office and collected the phones of my staff members and a day later they came to lock up the office.”

An investigative committee was tasked to probe the issue after US-based Environmental Investigation Agency’s (EIA) said the government was failing to clamp down on illegal rosewood export despite the ban on the commodity.

The committee was tasked to investigate allegations of corruption as reported in the EIA’s publication, examine all anomalies with respect to rosewood salvage permit, transportation and export trade and make recommendations for appropriate action to be taken to halt the flouting of the law.

It was headed by a Deputy Minister of Lands and Natural Resources, Benito Owusu-Bio.

Highlights of the report were subsequently released.

The release of the highlights of the report comes after  Dr. Apaak, accused the government of trying to cover up corruption in the enforcement of the ban on rosewood.

The MP had claimed that the investigative committee already “consists of the same group of people who have allegedly been involved in the illegal trade.”

Dr. Apaak had further said the Special Prosecution’s investigation into the matter will be more credible.

“That independent investigation will rather provide us with a clear picture of exactly what has been happening and will most likely indict the real NPP kingpins and senior forestry commission officials who have been involved in this trade.”

Diaries of an independent presidential aspirant #1: The day, the question!