I dreamed to be like Bola Ray; now I work with him – K. Bonnah shares radio experience

Host of ‘the Dropoff’ on Starr 103.5fm Kwadwo Bonnah popularly known as K. Bonnah has shared his radio journey so far noting he is delighted to be working with the likes radio greats such as Bola Ray, Jon Germain, KOD among others.

According to the radio presenter who is fast rising as king of late-night radio shows in Ghana, he never aspired to be any other professional but on-air personality.

Bola Ray breaks down at his PA’s funeral- Video

Bola Ray’s former P.A Crystal to be buried this saturday

He added that he used to be inspired by ace radio presenters like Komla Dumor, Tommy Annan Forson and Bola Ray.

In a recent video posted on his official social media pages on his radio journey, K Bonnah said “growing up I never even thought about being a doctor or counting money at the bank. It was always a dream to be on your radio to talk to you. So i used to listen to the people like Tommy Annan Forson, listen to people like Komla Dumor, listen to people recently like Bola Ray, listen to Jon Germain, listen to KOD.” 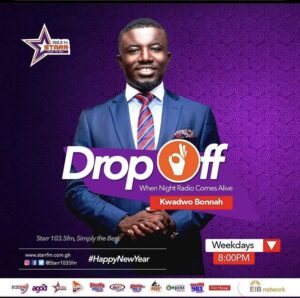 ‘The Dropoff’ show at a point in time gives the opportunity to solve marriage issues, gets to talk to lovers and get to talk to partners too.

K. Bonnah added “and hey I love the ‘confessions’ on my show. This is where Ghana shares its secrets Mondays and Wednesdays 8-10 pm.

TELLING THE RADIO STORY. The poor boy from Oseikrom now speaks to the world. Follow your passion, be prepared to work hard and sacrifice. Do not forget, Dream doesn’t become a reality through magic; it takes sweat and determination. Above all, don’t let anyone limit your Dreams. Everything is Possible. I am a living testimony of the phrase, “IT IS POSSIBLE” Join me on @STARR103.5FM, DSTV Channel 885 and GoTv Channel 197 (Monday-Friday, 8PM-10PM) Full video on IG TV. Video: @the.zeuz