“Beginning now, the full-scale exploitation of Ghanaian bauxite resources will commence,” Ghanaian President Nana Addo Dankwa Akufo-Addo said last June. “I am satisfied by what I have been told and what has been demonstrated to me that it is possible for us to get that red matter out without disturbing the wildlife that there is in the Atewa mountains.” The president may be satisfied, but environmentalists and concerned residents in and around Atewa are not.

On Jan. 13, Ghanaian environmental NGO A Rocha Ghana went to court in a bid to stop the mining project. Supported by 20 other civil society organizations, A Rocha’s suit claims that mining bauxite in Atewa will violate Ghanaians’ rights to a clean and healthy environment and the protection of the environment for future generations.

A treasure of biodiversity

The Atewa forest, 95 kilometers (59 miles) northeast of the capital, Accra, spans 725 square kilometers (280 square miles). Ranging in elevation from 230 to 845 meters (750 to 2,700 feet), the reserve supports a variety of different habitats, including more than 650 species of plants and a rare upland forest ecosystem. The forest is also the source for the Birim, Densu and Ayensu rivers, which provide water for some 5 million people, including residents of the capital.

Though Atewa is designated a production forest and has been logged in the past, it is home to many vulnerable and endangered species. The white-naped mangabey (Cercocebus lunulatus) is found here, and what may be the last viable population of the critically endangered Togo slippery frog (Conraua derooi). Among 155 bird species recorded in the reserve are the brown-cheeked hornbill (Bycanistes cylindricus) and the Nimba flycatcher (Melaenornis annamarulae). The reserve also hosts 17 species of rare butterflies, half of which are found nowhere else in Ghana, including the African giant swallowtail (Papilio antimachus), with a wingspan of up to 23 centimeters (9 inches). New species continue to be found here, such as the endemic Atewa dotted border (Mylothris atewa), a butterfly recorded nowhere else, and a new species of hooded spider, Ricinoides atewa. There are about 30 communities — around 50,000 people — in the area. Most residents grow cacao alongside food crops. They also enter the forest in search of bushmeat, snails, honey, mushrooms, and wild fruit.

This is where the state-owned Ghana Integrated Aluminium Development Corporation (GIADEC) is determined to develop a bauxite mine as part of a massive $2 billion infrastructure deal.

In July 2018, Ghana’s parliament approved an agreement with China’s Sinohydro Corporation Limited to build infrastructure projects including roads, hospitals, landfill sites, and industrial parks. The Master Project Support Agreement will also see the electricity grid extended to more rural communities. Ghana is to pay for these with $2 billion worth of refined bauxite.

n June 2019, GIADEC started clearing access roads to the summit of the Atewa forest to allow test drilling for bauxite deposits it believes amounts to 150 million to 180 million metric tons.

The plan to mine in Atewa has been strenuously opposed by environmentalists and local communities. In 2018, NGOs and faith groups walked the 95 km from the forest to the capital to protest the mining plans. More recently, a group calling itself the Concerned Citizens of Atewa Landscape organized a shorter march. Carrying placards reading “Save Atewa Forest Now” and “Atewa is our heritage,” the protesters marched 9.5 km (6 mi) from the forest to the local municipal seat in Kyebi on Jan. 21.

“GIADEC had entered the forest to explore and had drilled 53 points where the mining will take place, with the claim that the mining would take place in the northern part of the forest which will not affect the southern part,” Oteng Adjei, the leader of the group, told journalists. “Interestingly, the water table at the specific place being referred to is such that when you dig 3 meters [10 feet] deep, you will meet water. The bauxite is 6 meters deep [20 feet] and beyond, so the obvious conclusion is that the water will be reached before the bauxite is extracted.”

The company insists it will mine the bauxite in such a way that the forest will not be damaged.

“There are examples of industry best practices where forest reserves have been mined and successfully rehabilitated and GIADEC will draw upon these examples to ensure minimal impact to the environment and the local communities,” he said. “One example where the bauxite mining has been done in a sustainable manner is the jarrah forest in Western Australia.”

He said GIADEC would restrict mining near water bodies in the Atewa forest, as well as carefully remove and preserve topsoil for the preservation of the flora and fauna for later rehabilitation of the mining site.

Asked about an environmental and social impact assessment for the proposed mine, Ansah told Mongabay that companies that would be awarded the contract to mine the bauxite would be engaging with the Environmental Protection Agency and the Ghana Water Resources Commission to do the impact assessment — a key requirement before mining can begin. He confirmed that test drilling has been done and that he expects the companies that will be contracted to mine the forest to be selected before the end of March 2020.

“So, who gave GIADEC the permission to enter the Atewa forest and conduct the test drilling?” said Francis Emmanuel Awotwi, a lecturer at the University College of Agricultural and Environmental studies at Bunso, also in the Atewa enclave. Under Ghanaian law, one has to submit a work plan, site and concession plan before a prospecting permit can be granted.

Awotwi said he was also unconvinced by GIADEC’s claim that strip mining will protect ecosystems in Atewa.

He said the same approach is currently being used at Awaso, in western Ghana, and the outcome has been devastating. There, Awotwi said, the Awa River has been destroyed by the bauxite operations in the area, and people there can’t harvest rainwater because of the dust, adding that many of them are also suffering from respiratory diseases.

Regarding the reference to mining in Australia’s jarrah forest, protest leader Adjei pointed out that the rehabilitation model from Western Australia is irrelevant here. “There are hundreds of different type of tree species and animals in the Atewa forest which can only survive in a natural habitat and GIADEC hasn’t shown any effort or roadmap towards preserving them, while it prepares to start the mining operation,” he added. 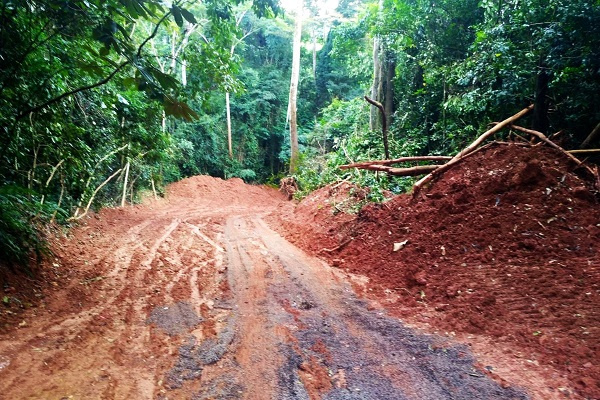 The state-owned aluminium company says it can mine Atewa with damaging it, but conservationists are unconvinced. Image courtesy A Rocha Ghana

Awotwi says the estimated 700 million metric tons of bauxite deposits at the Nhyinahin forest reserve alone could produce the $2 billion needed for the Sinohydro deal, without touching the Atewa forest. “We have always known that there is bauxite at Atewa, but governments have come and gone and nobody has touched Atewa because it is a very sensitive area ecologically.”

Nhyinahin is part of the Tano-Offin Forest Reserve, in the Ashanti Region. But here, too, there is resistance to bauxite mining. Traditional leaders in the district have petitioned President Akufo-Addo to halt the proposed mining operations, citing lack of consultation from GIADEC.

Communities around Atewa have also rejected the assurances being given by GIADEC.

“We don’t live in a dreamland anymore and we are not 17th-century Ghanaians,” said Emmanuel Tabi, a local assembly representative. “Where is the environmental impact assessment? What is the roadmap? Let them be serious so that we will take them serious. They can’t just throw anything at us.”

Tabi said he fears the worst for people whose livelihoods depend on the forest. “The Atewa Forest Reserve defines our livelihood. So, if anything should happen to the forest, the rainfall pattern will change and our livelihood also change. It will affect everybody living along the line and it is therefore important that the forest is reserved,” he said.

Tabi has called on the president, who also comes from the Atewa area, to cancel the proposed mining project and instead turn the forest into a national park.