He told the High Court he does not have any evidence to back the lies neither can he afford the 25 million Ghana cedis the plaintiff was demanding as damages and pleaded for an out for court settlement so he can do the needful.

Search heaven and hell, you won’t find galamsey evidence about me – Kweku Baako

In a retraction and apology to that effect, he said “on the 1st day of March, 2019, 1 caused to be published and made several statements on Adom TV’s, “Adom Badwam” program hosted by Omanhene Kwabena Asante against Mr. Abdul Malik Kweku Baako Jnr which are defamatory.

That in discussing issues surrounding illegal mining, I uttered words to the effect that Mr. Abdul Malik Kweku Baako Jnr and Anas Aremeyaw Anas together with Aleska C & G and Heritage mining were involved in “galamey” activities destroying Ghana’s forest.

The said allegations are false and same should not have been made on the progam. In this regard, the comments made are incorrect is most regrettable.

I, Horace Ekow Ewusi, do hereby apologize and unconditionally and unreservedly retract the allegations and comments made against Mr. Abdul Malik Kweku Baako and his associates during the discussions on the aforementioned television program.

I finally, undertake not to further publish or reproduce the said allegations. 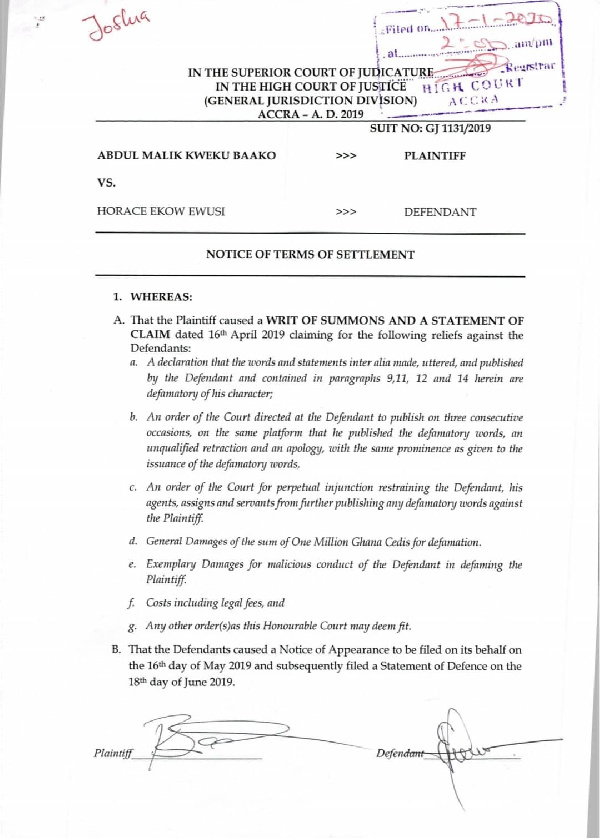 Are you the only single mother in Ghana? – Akrobeto fires Akuapen Poloo

Prophet Nigel Gaisie carries woman on his back in church

5 amazing benefits of aloe vera you didn’t know about