Tenants of the Ghana Trade Fair Company Limited whose structures were demolished about two weeks ago have been given up to April 1, 2020, to get their properties off the company’s land.

A letter to the aggrieved tenants dated 21st February 2020 and signed by the Chief Executive Officer of the company, Dr Agnes Adu says the company is planning on restricting access to the centre to ensure ‘public safety’ due to the ongoing redevelopment project, hence the need for them to move out.

We used the law to ‘beat’ you; no one will compensate you – Trade Fair CEO ‘mocks’ Raymond Archer

“The centre will be closed to the public effective April 1st 2020. You are therefore required to make the necessary arrangements to remove your items from your premises,” the statement reads.

Though the tenants claim they were not given prior notice before the demolition, the Trade Fair Centre in a press statement, a few days after the exercise said the tenants were informed of the redevelopment of the centre and the need for them to vacate the premises by December 2018.

The statement stated that “since 31st December 2018, therefore, none of the business on-site had any valid tenancy agreement with the GTFCL.”

It further stated that despite the expiration of the agreements, the company was very cooperative with the businesses with the view to finding the least disruptive means of achieving the goal of redevelopment.

“When the Company commenced demolition of some redundant facilities in the first quarter of 2019, some of the businesses took the Company to court and further secured an injunction to restrain the Company from evicting them from the site.”

The Ghana Trade Fair Company Limited (GTFCL) took its tenants by surprise when it embarked on a demolition exercise backed by “orders from above” to destroy dozens of factories which are worth millions of dollars.

In the dead of the night on Sunday, 16th February, 2020 when the owners of these multi-purpose factories were probably sleeping, the authorities of Trade Fair decided to go on a demolition spree.

The exercise which began around 10pm that Sunday and ended after 12:00am the following day, saw two bulldozers and a team of armed police officers overseeing the destruction of structures and heavy industrial equipment.

The tenants have since filed a suit of contempt against the CEO of the centre, Dr Agnes Adu and Board chairman, Dan McKorley (McDan). 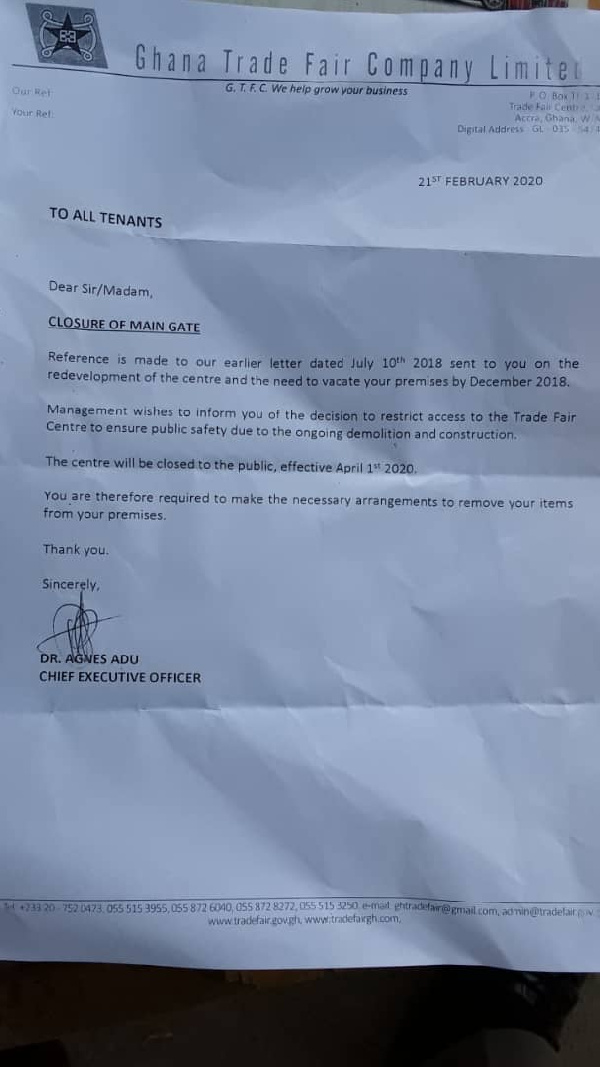