The 1999 old students year group of Accra Academy who funded the renovation and refurbishment of the school staff common room, have handed over the project after its completion at a ceremony in the school located at Kaneshie in Accra.

The fifty-five thousand cedi (Ghc 55,000) cost of refurbished staff common room was in fulfillment of a promise by the 1999 year group following an appeal from the management of the school.

Ghana Month: Accra Academy, Ghana National, others and what you may not know

The amount covered the cost of providing four air conditioners which changed the entire ventilation to give more comfort ,a 55inch television set and another 43 inch size , a refrigerator , rewiring of the entire room ,the entire make over of furniture ,painting as well as tiling the floor and the provision of blind curtains among many other expenses.

The handing over of the project was the climax of activities to commemorate the 20 years anniversary of graduating from the school.

During the handing over ceremony which had the leadership of the current students in attendance,the president of the 1999 year group,Mr Yao Anani Kuwornu, eulogized the teachers for their efforts in shaping their minds towards preparing members of his year group for the world of work and made special mention of the then headmistress,Mrs Beatrice Lokko who he said was firm and showed passion.

“As a climax to our 20th anniversary celebration we are delighted to be able to give back by refurbishing the staff common room “,he noted.

“We know that this is your next home away from your respective homes so we considered the need to contribute our widow’s mite to your comfort. We hope that by providing a modern and useful place of rest ,you have the soundness of mind to continue to impact our little brothers”,he submitted.

Mr. Kuwornu seized the occasion to single out the United States based members of his year group and some individuals living in Ghana for their huge financial contributions towards the project and that of the project committee whose relentless dedications and selfless commitments resulted in the successful completion of the project.

On his part,the headmaster,Reverend William Foli Garr called on other past students to emulate the example of the 1999 year group,saying he has always enquired from old boys who come to his office what they have done for the school.

For him , the refurbishment of the staff common room by the 1999 year group therefore answers that particular question and hope other year groups will follow suit.

He said government cannot do much when it comes to the provision of infrastructure since the resources have gone into the free senior high policy. 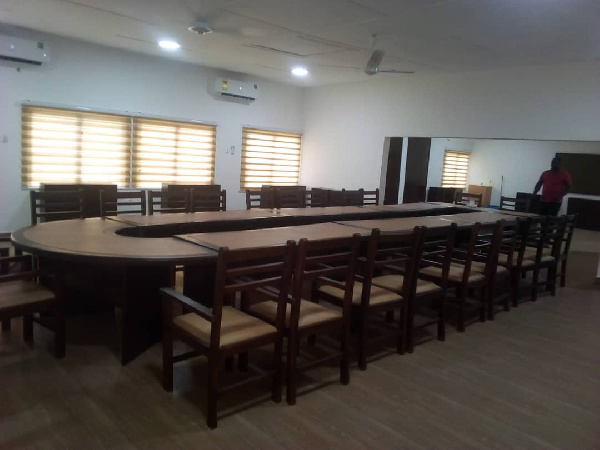 Supports such as the refurbishment of the staff common room by the old students, he therefore explained helps to meet the needs of the school.

He however called on the current students to take good care of logistical support that are provided by the old students ,urging them to do away with behaviors that tend to destroy school facilities since such destruction only go to widen the infrastructure needs of the school.