How the U.S. is laying claim to the groundwork for Ghana’s ‘Year of Return’

Ghana has hosted a successful ‘Year of Return’ tourism campaign which has reportedly attracted more than 200,000 people from the African Diaspora and generated over $1.5 billion.

A lot of credit for its success has been given to the CEO of the Ghana Tourism Authority, Akwasi Agyeman who met the CEO of Adinkra Group, Diallo Sumbry in 2017 and signed MOUs to make Ghana a major tourist destination.

After a series of tours in the U.S., they decided to use the upcoming 400 years of the arrival in 1619 of the first 20 enslaved Africans in Jamestown, Virginia to push a marketing drive in the U.S. to get black people to return to Ghana.

This was backed by President Nana Addo Dankwa Akufo-Addo in 2018 and he proclaimed 2019 as the “Year of Return” at the Washington Press Club, in Washington D.C. and invited black people in the U.S. and around the world to visit Ghana.

However, in an article written by Tiffany M. Gill, an associate professor of Africana studies and history at the University of Delaware and published by The Washington Post on January 10, 2020, she described an African American fashion designer as the one who laid the groundwork for Ghana’s ‘Year of Return’.

Titled, How a black female fashion designer laid the groundwork for Ghana’s ‘Year of Return’, the article talks about how Freddye Henderson supposedly facilitated African American tourism to Ghana when it gained its independence in 1957. 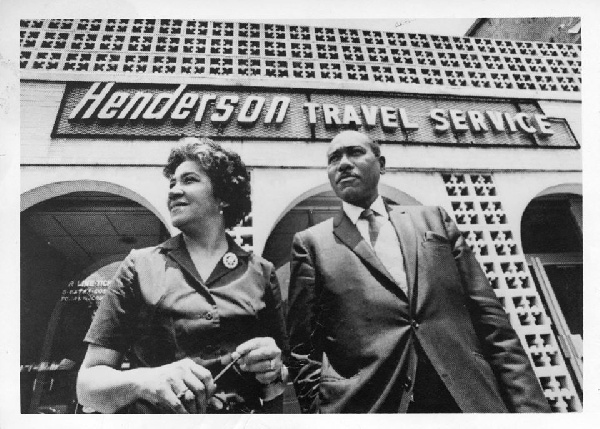 The American writer acknowledged Ghana’s ability to capitalize on tourism related to the memory of the Transatlantic slave trade with the “Year of Return” but credited Freddye Henderson who she described as the “architect of African American travel to Ghana.”

“Her commitment to transforming African Americans’ problematic ideas about Africa developed the tourist infrastructure that made Ghana’s 2019 Year of Return possible,” she added.

Gill traced Henderson’s relationship with Ghana to 1957 when “the U.S.-educated Kwame Nkrumah,” as she puts it, invited black American political leaders including Henderson’s close friends Martin Luther King Jr. and Coretta Scott King, who asked her to help them plan their first trip to Africa.

“Henderson planned their travel but also joined the delegation, changing not only the trajectory of her life but of African American-Ghanaian relations.

“This presented Henderson with an entrepreneurial opportunity. She moved to develop partnerships with black Ghanaians, helping local taxi drivers buy buses to shuttle members of the African American delegation across the country and working with Ghanaian female entrepreneurs and artisans to design garments and accessories that her travelers would want to buy.

“Henderson presented Ghana as an appealing tourist site because of its triumph over white rule and oppression. This portrayal resonated deeply as black Americans engaged in their own battles for full citizenship,” the article explained.

It went further to elaborate her continued effort to bring African American tourists to Ghana even after the overthrow of Nkrumah until the 1970s when African Americans redirected their interests to knowing about the slave past.

Gill noted how Henderson visited Ghana for the last time in 1999 before her death in 2007 and was honoured by Ghana’s tourism ministry with a ceremony and was named Nana Akwantu Hemaa, which means the Queen Mother of Travel and Tours, “for her work pioneering travel to the nation and for sending tens of thousands of travelers to its shores.”

Calling Freddye Henderson the pioneer of African American tourism to Ghana is a bit far-fetched because the West African country has a long history, way before Henderson, of inviting African Americans to visit the country but only failed at many attempts to get them to settle due to the then unwelcoming environment contrary to the promised land preached many decades ago.

Before Marcus Garvey presented his famous “Back to Africa” programme in New York City in 1920, Ghanaian merchant and pioneer pan-Africanist from the Gold Coast (Ghana), Alfred Charles Sam, had personally started a campaign to resettle African Americans in their “ancestral home” in freedom, cites Ismail Akwei in an article on Face2Face Africa. 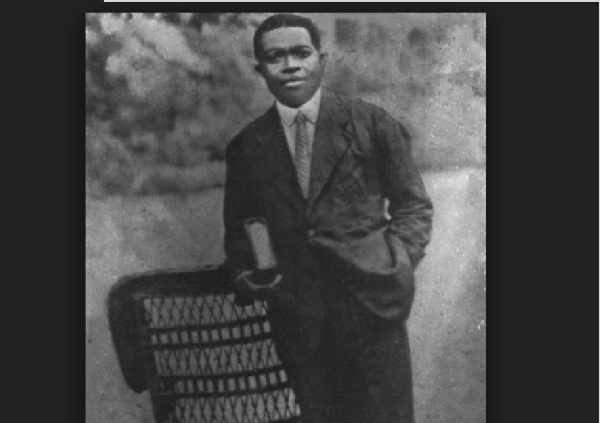 Sam purchased the former German ship Curityba and renamed it S.S. Liberia to embark on a voyage back to Ghana to settle at Akim. He initially embarked on the first voyage with 60 African Americans who sold all their property to join him in the “promised land”. They made it to Saltpond but were denied ownership of the land Sam had promised at Akim.

After physical and financial hardships due to restrictions, some of the settlers returned to Oklahoma where they came from while others went to other African countries including Liberia, writes Akwei.

Year Of Return has ended, return home to impact your skills – Barbara Gyasi to expatriates

Before Sam’s attempt in 1918, Laura Adorkor Kofi left everything in the Gold Coast (Ghana) and moved to the U.S. to start her duty as a Godsent prophet to black people in the diaspora. This was after she supposedly received a vision from God to move to the United States and help the African-African community return to the promised land of Africa.

Popularly known as Mother Kofi or Mama Laura, she was born in Accra around 1893 as indicated on her gravestone. Also written on her gravestone in Old Jacksonville City cemetery is the title Princess which suggests that she was of royal lineage from a Ga community called Asofa, Face2Face Africa documents. 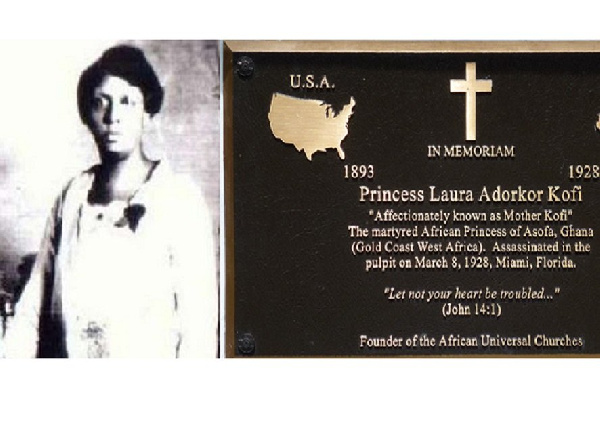 Laura Adorkor Kofi and her tomb

Soon after moving to the U.S., Laura settled in Detroit and became a close associate of Marcus Garvey who had started a Negro’s movement and gained a huge following. She was soon appointed as national field director for Garvey’s Universal Negro Improvement Association.

While working with Garvey, Laura became a prominent spokesperson within the Universal Negro Improvement Association and soon became the most popular member. Laura was sent on missions to address tens of thousands of people she was able to pull. After Marcus’ arrest for mail fraud in 1925, Laura gained more popularity and encouraged African Americans to return home.

Unfortunately, after his release, the two had a fallout and Marcus started to describe her as a fake and constantly appealing for her arrest.

Feeling that her life was in danger especially after the release of Marcus Garvey, Laura resigned from the Universal Negro Improvement Association and relocated to Jacksonville where she felt safer and more welcomed.

Through her church and with her role as the “Warrior Mother of Africa’s Warriors of the Most High God” – a title she gave herself as head of the church – Laura preached about Africa as the promise land and why African Americans should make the trip back home.

On March 8, 1928, Laura was killed during a speech while addressing a crowd of over 5000 people at a church in Miami where she had not visited since she left. During her sermon, she was speaking about the power of God to help Africans and black Americans.

Laura was shot in the head minutes after telling her bodyguard to take a seat while she continued her speech to the people. Her death caused an uproar which led to the instant death of Maxwel Cook, a Jamaican known for being a Garvey supporter who is believed to have been the killer. As punishment, Maxwell was beaten to death by the crowd.

Her body was carried off to Jacksonville where she was buried. In her honour, a small settlement close to her church was built and named Adorkaville.

The West African country passed the “Right of Abode” law which allows any person of African descent to apply and be granted the right to stay in Ghana indefinitely.

This was followed by the launch of the Diaspora Affairs Bureau under the foreign affairs ministry in 2014 to manage the migration and engage the diaspora to provide a sustainable link with various government agencies to achieve development and investment goals.

As at 2014, over 3,000 African-Americans and people of Caribbean descent are estimated to be living in Ghana. The Diaspora Affairs Bureau has expedited the acquisition of the permanent residency which was earlier delayed by bureaucratic processes. It took some applicants years to get their official documentation when it was supposed to take six months.

Many resorted to renewable resident permits and marriages with Ghanaians to stay and work fruitfully in the country. Rita Marley, the wife of reggae legend Bob Marley, was the first person to be granted the indefinite stay in Ghana in 2014, 14 years after the law was passed.

In 2016 alone, 34 Afro-Caribbeans were granted Ghanaian citizenship to enjoy full benefits as Ghanaians. Those who have stayed on appreciate the warmth and peacefulness of the country despite the few cultural setbacks like being regarded as more American and Caribbean than African despite years of living in the country.

Ghana was home to pan-Africanists like George Padmore, Maya Angelou, W. E. B. Du Bois, Pauli Murray among others who emigrated after the country’s independence in 1957 after establishing a friendship with the first president Kwame Nkrumah who himself had studied in the United States.

Many other distinguished African Americans have visited the West African country in the 50s and 60s to witness the promised land and warm hospitality offered by Ghana.

Freddye Henderson may have facilitated some of the travels to Ghana and other African countries with her Henderson Travel Service, but she definitely isn’t the pioneer of African American tourism to Ghana and cannot be credited for the groundwork of the Year of Return 2019.

Coronavirus: Support us too – Persons with Disability tell Government

Eyes on the Ground: Work resumes on 10-year-old drainage system at Sakaman during lockdown

Lean On Me singer Bill Withers dies at 81