Ghanaian actress Lydia Forson has reacted to claims that she and her colleagues in the entertainment industry were ‘snubbed’ by American rapper Cardi B.

Narrations by some of the personalities indicated that they were invited to a private meet up with Cardi B by the organisers of the show but upon reaching the venue for the event, none of the organisers would offer any explanation as to when and how the ‘Meet and Greet’ would be coordinated. After waiting for more than five hours, neither Cardi B nor the organisers showed up.

Cardi B supports Akuapem Poloo amidst coronavirus outbreak in Ghana

Lydia Forson was nearly beaten by some ladies because of a man? – Watch this video

The apparent embarrassment did not only ignite anger in one but all the personalities who were present as they took to their various social media pages to vent their displeasure.

In a reaction to all that went down, Lydia Forson, who has become a target for social media trolls over what they say was a ‘lab coat’ she wore to meet Cardi B, has proffered her side of the story.

In a twitter post, the actress noted that she knew Cardi B had no idea about the supposed ‘meet and greet’ the moment she realized it wasn’t “as ‘private’ as the organisers had indicated.”

Her post read; “I knew this was NOT on Cardi B the minute I got there and realized it wasn’t as private as the organisers had indicated. It’s why I left. Truth is, we all got played.”

Read:Angry fans throw bottles to the stage at Cardi B concert in Ghana (Video)

Meanwhile, Cardi B upon realising the communication gap created took to her Instagram to explain and apologise over what really prevented her from meeting with Ghanaian ‘celebrities’.

She added that some of the celebrities came down to the poolside but filed past her and refused to prompt her about the supposed ‘Meet and Greet’. 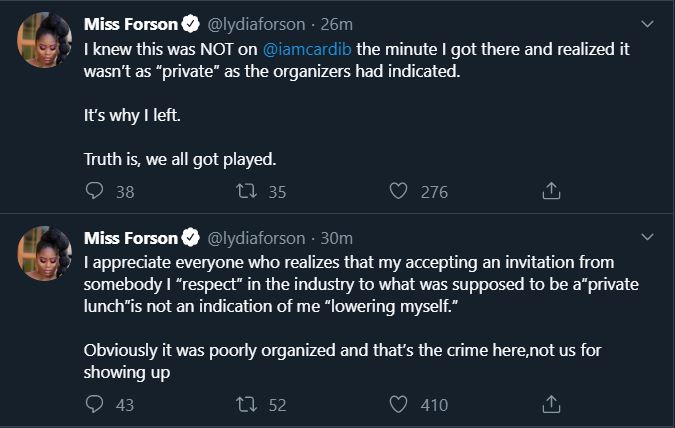 Members of the Executive exempted from lockdown