The controversies surrounding the ‘Meet and Greet’ saga between some selected female ‘celebrities’ in Ghana and American rapper, Cardi B seem to have been taken into another realm after media personality Abeiku Santana dragged Nana Aba Anamoah into the saga.

Abeiku Santana during his radio programme attacked Ms Anamoah for her failure to properly address the controversy.

Abeiku Santana is destined to be a prophet – Pastor claims

He alleged that during BBNaija star, Tacha’s visit to Ghana, Nana Abamoah made some derogatory comments about the reality TV star but has failed to slam the organizers of the ‘Meet and Greet’ for embarrassing the celebrities.

Read:Why is Nana Aba silent about the Cardi B brouhaha yet lambasted UTV for bringing Tacha to Ghana – Abeiku Santana

He is quoted to have said, “Does Cardi B have an appointment with you Ghanaian celebrities? Did she call you people? And you Nana Aba Anamoah with the sharp mouth, you comment about everything that goes on… Why have not addressed this issue on social media? We brought BBNaija star Tacha to teach her about the cultural values of Ghana and you disrespected her.”

Referring to Nana Aba as a ‘Class Prefect’, the radio personality further questioned why the newsscaster hasn’t yet dressed down the event organisers for shoddy work.

But Nana Aba Anamoah who did not receive the Abeiku’s reaction lightly, took to her Twitter page to demand answers to some pressing questions about his rather ‘loose’ comments.

Her post read; “Did Abeiku really say that I dissed UTV for bringing someone to Ghana? I’d like to know when and where I did that? Abeiku Santana did you really say that? Oh, nka this TL will be LIT. Kindly confirm if you opened your mouth to spew what these bloggers have been claiming.”

The heat turned one level up when Abeiku Santana provided an explanation to his comments on radio.

However, Nana Aba Anamoah who was unimpressed about his explanation slammed the Okay FM presenter describing his clap back as a “load of trash”.

She reiterated that she genuinely had no idea about who the BBNAija star in question was as she had never heard any news about her.

“Asking who Tach is, is your idea of me dissing UTV? Such a load of trash! You expect me to pretend to know who she is when I clearly don’t? Do you know every single person in this world who appears on TV?…,” she retorted.

on the trending #MeetandGreetWithCardib and the female celebrities. According to him, she was very vocal when Despite Media brought Tacha to Ghana so he was expecting her to do same when her own EIB brought Cardi B to Ghana and things went wrong. . Do you agree with him? . . . . . . . . #GhanaPaparazzi #AfricaPaparazzi #NkonkonsaCelebVideo #NkonkonsaExclusiveVideo #NkonkonsaVideo #Nkonkonsa #Ghana #Africa #Accra #CardibLiveInGhana #livespotxfestival

Read the tweets below: 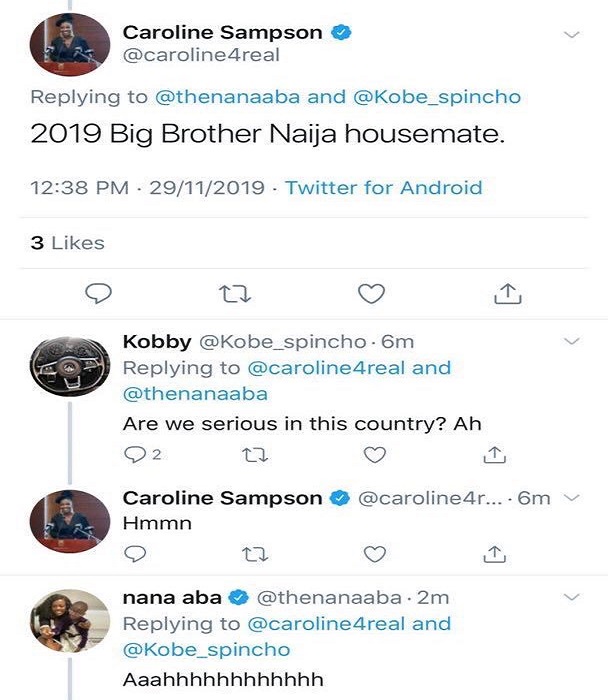 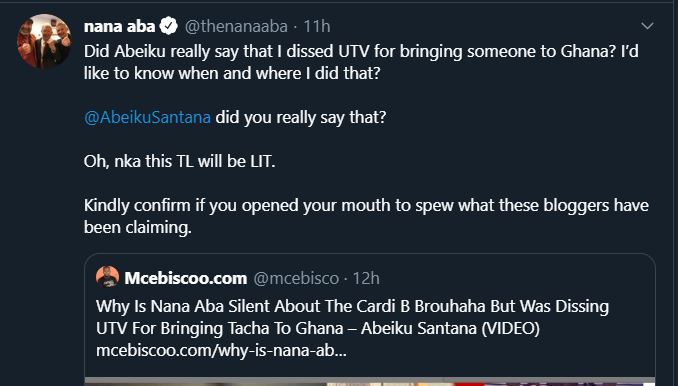 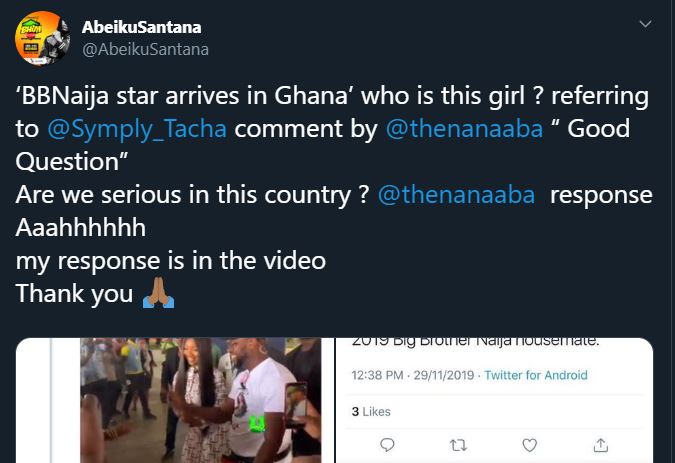 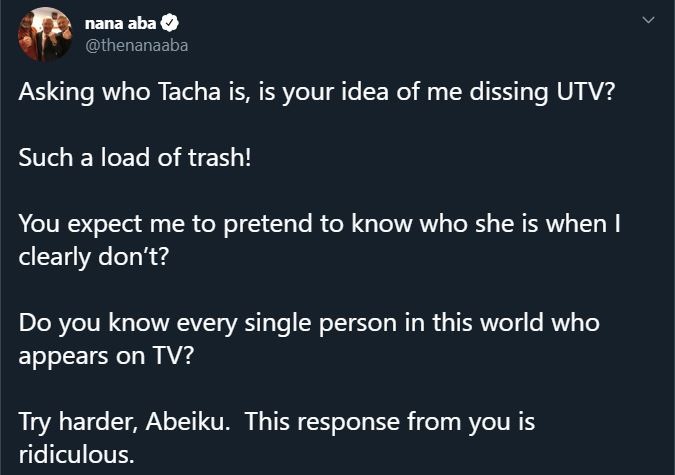