207 Benz romance, meet the couple working together as driver, mate

For five years, Adjeley and Armah have been working as driver and mate

Becoming business partners could be a difficult task for couples as balancing personal and business relationships is no mean task.

Both sides of the relationship, if not managed properly, could rub off on the other in a negative way, hence the old cliché which advises never to mix business with pleasure.

Driver’s mate gets five years for threatening his mother

However, for 55-year–old Edward Armah Ago and his wife Evelyn Adjeley Adjei, 42, working together as a couple has strengthened their commitment to each other and deepened their relationship.

For five years, Armah and Adjeley have been working as a driver and bus conductor (mate) respectively, plying their trotro business between La Tse Addo and Kwame Nkrumah Circle.

According to Armah who has been in the trotro business for about 30 years, he acquired his licence in 1989 after working as a mate for some years at the La honesty station.

When he started driving in the early 90s, he realised the income from that business was not sufficient to sustain his family and, therefore, together with his wife, decided to venture into producing local gin, commonly known as ‘Akpeteshi’.

With profits they made from the business and support from the local drivers’ union and Armah’s sisters, they purchased a Benz bus.

Decision to work together

Mr Armah explained that he realised his mates made more money at the end of each trip as they didn’t account properly for the monies collected from passengers.

“We usually load from station to station but most of the times, people alighted before we reached the station and though the mates pick new passengers to fill the empty seats, they never accounted properly for it.

“When we finally purchased our own vehicle we decided to work together as a couple, which has been very successful as we have paid our debts and are able to fully support our family from the business,” he said. 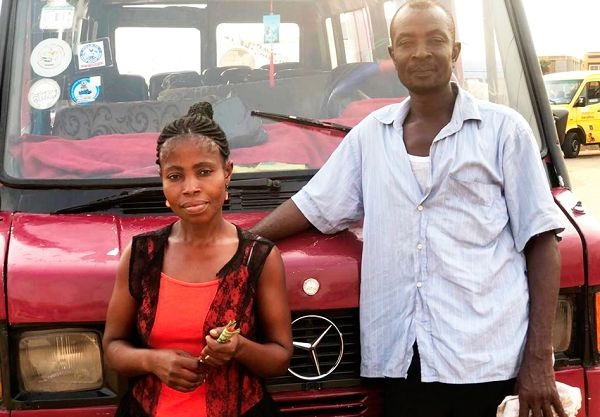 Working in a man’s world

Confirming the earlier claims by her husband, Adjeley said within a short period, they realised working together in the trotro business was more rewarding.

She said people always stared when they saw her “shadowing” (a term used by mates to describe how passengers are invited to board a vehicle) but she was not bothered as that was how she and her husband made money to cater for themselves and their five children.

She has also been able to establish a relationship with other drivers, mates and station masters, mostly men, and they also accord her the necessary support.

Each worker at the Nsawam station at Kwame Nkrumah Circle who spoke to this reporter was full of praise and admiration for the couple.

Mr Joe Anang Kwade, a driver, described the couple as humble, respectful and hardworking and recounted several instances where the couple supported some passengers who couldn’t pay their fares.

“I really love how this couple work; their selfless nature and how his wife accounts for every penny to the husband after the day’s work,’’ another driver, Mr Patrick Safo, added while commending them for differentiating between their love affair and business. The Chairman of the La Tse addo – Circle drivers, at the station, Mr Francis Tamatey, said: “ They are very serious with their work. Unlike other drivers who usually have misunderstandings with passengers, you will never find them do such a thing.’’

Some random passengers also shared some encounters they had had with the couple and commended them for their level of professionalism.

Patrick Abbey, an accountant who frequently boarded the bus, gave an account of how the wife assisted lactating mothers with their babies and also helped the aged and toddlers.

“I love their sense of humour and the bond they work with. I really admire them and they are my role model.”

The couple, who have been married for 15 years, told the Mirror they were optimistic that they would be able to save more money and buy a better vehicle and hopefully, start a ‘work and pay’ business for other dedicated drivers.

“We are able to cater for the education of our five children and take care of ourselves and a few other dependants through this business.

Currently we work six days in a week and rest only on Sundays so we are able to save more,” Adjetey stated.

No justification for closure of Bright SHS – Old students

Coronavirus has created jobs for the vulnerable – Ministry of Gender