Some new mothers at the Tatale hospital

Newly delivered mothers at the Tatale District Hospital are being compelled to share single beds while unlucky ones sleep on floors.

Males, females and children on admission for various health conditions are also being put in the same ward.

Odd News: Man refuses to pay hospital bills because his child is too ugly

Health authorities say the situation is as a result of inadequate space due to the small nature of the hospital.

It attained the status of a district hospital in 2015 and a medical doctor posted to the facility.

Lack of space, inadequate beds and staff accommodation are some of the challenges facing the hospital.

The 32-bed capacity hospital also serves as the only referral health facility for clinical cases in Tatale, Zabzugu and neighbouring Togo.

Maternity, paediatrics, theatre, laboratory and mental health are some of the services rendered by the hospital.

When 3news.com visited the hospital Thursday evening, new born babies and their mothers who had no beds were lying on paper cards on the floor of the maternity ward serving as mats.

At the time of our visit, the five-bed capacity maternity ward was full, forcing officials to send some of the 12 new mothers on admission at the time to the female ward to share single beds while others slept on cardboards on the floor with their babies.

The male ward has also been turned into a mixed.

Some of the patients on admission were seen lying on the floor while others sat on chairs.

The few beds were also being shared by patients due to increasing number of admitted cases.

While some were two, others were found three on their beds. Others, who do not have beds, had to sit or stand on their feet while taking medication.

“I have been lying on the floor with my two days old boy which is not good. I wish I delivered at home,” a woman who spoke on condition of anonymity told 3news.com 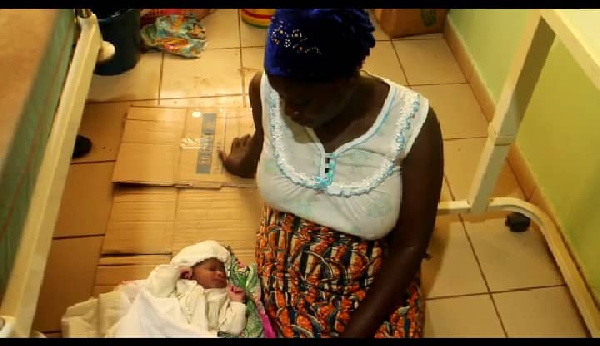 A Nurse Manager at the hospital, Iddrisu Yussif, blamed the situation on increasing number of admission cases, stating hospital authorities are alarmed by the numbers.

“We can’t turn them away so we admit. In a day we admit more than 60 and so they have to pair in twos and others three”.

He expressed worry over the situation at the maternity ward, noting “The space is small. Some of them stand throughout the night to take infusions”

A theatre nurse, Osman Awudu, complained the theatre has no monitor to check the condition of patients during surgeries.

The only ambulance donated by a former MP for the area which was being used referral emergencies to Tamale has broken down.

Medical superintendent of the hospital was in Tamale on official duty when our team visited the hospital Thursday.

Despite the challenges, the facility has since 2016 not recorded any maternal mortality.

Men who kneel to propose are fools – Pete Edochie