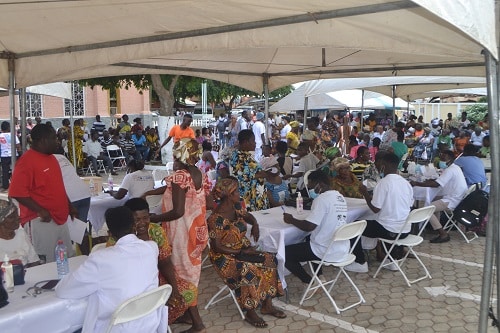 More than 150 individuals from Somanya and neighboring towns in the Yilo-Krobo district of the Eastern region, including children, adults, and seniors, showed up to get examined for various health-related ailments yesterday, September 21.

Traditional leaders from the town and other nearby communities weren’t left out either, as they alternately went through the vetting procedure.

The event, which was sponsored by the National Lottery Authority’s (NLA) Good Causes Foundation in collaboration with the Lafiya Clinic, involved screenings for conditions like high blood pressure, diabetes, hepatitis B, and hypertension.

The screening began at 10 am with the people seated patiently under tents waiting to take turns to go through the screening process and also receive medical attention as well as advice from medical officers present.

Medical officers took the opportunity to educate the people who had turned up for the health screening on health issues using the blend of the English language and the local dialect for better understanding.

A Physician Assistant at the Lafiya Clinic, Ms Clara Nyarko, said she realised during the screening process that some of the people were suffering from hypertension and were resorting to the use of herbal medicine for treatment.

She was of the view that resorting to herbal medicine was not a bad idea but it becomes problematic when the herbal treatment are received from unlicenced herbal clinics.

Additionally, Ms Nyarko said “most of them had the impression that the orthodox medicine have side effect so they want to take the herbal medication because those ones do not have side effects.”

Ms Nyarko, therefore, implored the people to visit a licenced or authorised medical centre at least twice a month for regular medical check-ups.

The Coordinator of the Good Courses Foundation, NLA, Ms Amma Frimpong said the health screening was the second of many nationwide health screening exercise to be organised under the mandate of the Director-General of the NLA, Mr Sammy Awuku.

She further added that it also afforded the NLA the opportunity to improve its relations with the community and educate them on its activities and operations while advising parents to ensure that their children below 18 years did not get involved.

According to Ms Frimpong, the Foundation budgeted an estimated amount of GH¢80, 000for the exercise which included the payment of medical staff, medications and other expenses.

The Municipal Chief Executive (MCE) of Yilo-Krobo, Mr Eric Tetteh, lauded the NLAfor the exercise saying it was important for the improvement of health among people living in the 33 municipalities in the Yilo-Krobo district.

The Assembly, he opined, was committed to ensuring that the health of the people in the district was improved through consistent education on sanitation leading to attitudinal change.

He, therefore, advised the people to observe good sanitation practices such as constant cleaning of the environment, regular exercising and the taking in of healthy diet.